One sees simplistic application of ohms law to antenna balun problems frequently in online forums, but is the technique valid? 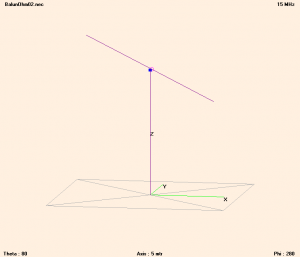 Above is the model geometry of a sloping dipole in NEC. The vertical conductor models the common mode current path of a coaxial feed, the blue square near the top is a balun modelled as a load of 500+j500Ω. The red circle is the source exciting the model. This is a classic way of modelling a coax fed dipole.

The model solution shows the feed point voltage (ie the voltage that would appear between inner and outer conductor at the end of the coax) to be 95.6V for 100W RF power.

Back of the envelope Ohms law

In this example, the error in the Ohms law method is 34% in current, and 57% in power. Results will be different for different scenarios.

The voltage impressed across the balun is 73V, quite a deal different to the 47.8V basis of the back of the envelope Ohms law method.

The Ohms law method is sometimes described as a ‘worst case’ scenario, but in this case it underestimates current and power by a large amount… it is not ‘worst case’ at all… just plain wrong.

This is not to say that Ohms law doesn’t work, it is the inputs that are invalid and so the result is invalid.

It is a total failure of basic circuit analysis to think that this might work… yet it is done frequently by ‘experts’ and gullible readers soak it up.

If you see an ‘expert’ doing this, accept it as evidence that they really have no idea about baluns in antennas!