Glitches on the displayed data are occasional, but hardly rare, and are a concern.

The nanoVNA was OSL calibrated (is for reflection only) from 1 to 500MHz and the cal save in C4.

On repeated scans of the SC used for the cal, there are obvious occasional glitches evident on various PC clients. 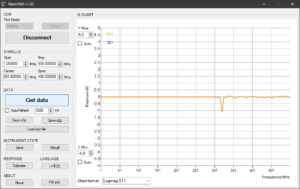 Above is nanovnasharp v1.03. An expanded scale shows the observation, an occasional single measurement, always with a downwards glitch  of |S11|dB of variable magnitude, but usually less than a couple of dB. 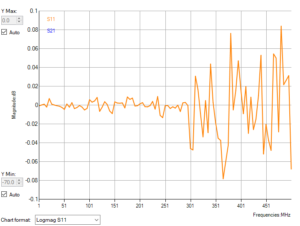 The chart above shows the measurement noise on a typical sweep. It can be see to be much worse above 300MHz where the instrument is using third harmonic mode. But, in any event, it seems that glitches of 1dB or more would be very unlikely where Standard Deviation would visually appear to be of the order of 0.03dB above 300MHz, perhaps a tenth of that below 300MHz. 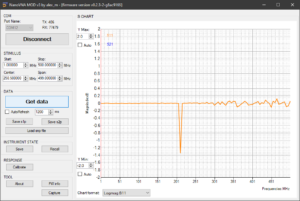 Since the latter is a derivative of the former, let’s try another client (otherwise dismissed due to too many identified defects). 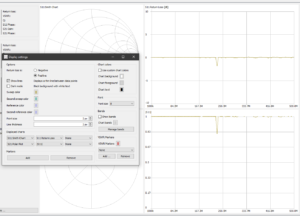 Above, the glitches are also evident in nanovna-saver 0.1.4. You will note also that the glitch in the bottom graph is downwards (and nanovna-saver will not let me set the lower Y limit to 0.95), the Return Loss plot is negative despite the stickler / hammy switch being set to industry definition that ReturnLoss=-20log(|S11|). Looks like an incomplete patch to cater to hammy users. 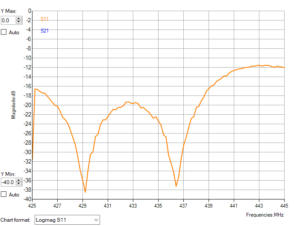 Later observation on repeated sweeps from 425-445MHz is that they are more frequent, and most likely affect the first observation, could be up or down by several dB, which might suggest that the oscillators have not stabilised or perhaps some type of ADC startup issue.

The glitches might be dismissed as unimportant, but without understanding why they occur, and how they are distributed, confidence is undermined in the measurement capability and any data that is manually edited or selected to remove outliers raises concerns.

The glitch may also affect calibration sweeps, so it may be import to view them for atifacts before binding them into a calibration set.