An online poster was demonstrating the effect of varying line length on a half wave dipole on VSWR(50) and by mistake configured the line be of of Zo=75Ω.

He asked the question

In the general case, if you are trying to match 50 Ohms, would you be better off feeding a normal backyard dipole with 75 Ohm coax if you are willing to prune it to a specific length after the fact?

Let’s look at the general case using a lossless line to simplify analysis and presentation.

If the objective is that Zin=50+j0Ω and Zo=75Ω, then the load impedance components can be plotted against the electrical line length. 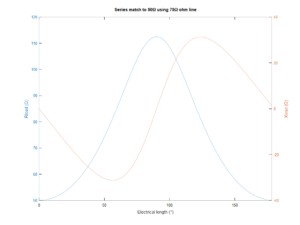 Above is a plot of Rload and Xload vs the electrical length of lossless 75Ω to transform the load to 50+j0Ω.

Let’s say we have a dipole with feed point R of around 65Ω, drawing a horizontal line from R=65Ω across to the blue line, and then dropping that vertically we find that the electrical length needed is 40°, and Xload needs to be -27Ω. So the dipole needs to be shorter than a half wave to obtain Z at the feed point of 65-j27Ω.

Now in practical terms, R will change a little as the length is varied around a half wave, so it might take a few iterations to find the combination of R and X. The combination can be found more quickly by measuring the feed point impedance with an analyser that can display VSWR(75), just shorten the dipole until VSWR(75)=1.5. Use the measured Rload and Xload to find the expected electrical length of line from the chart above.

The electrical length of the line has to be converted to physical length, and it is LengthDegrees/360*300/FrequencyMHz*VelocityFactor metres.

The chart presented is for lossless line. Lossy line changes the curves slightly depending on line loss, but the figures a a good start for in-situ tuning.

Note that below 50MHz, the very popular RG6 line with CCS centre conductor may have significantly more loss than expected.

The above analysis assumes that the feed point impedance does not change when feed line is attached, but that may not be true if there is significant common mode current.

Understood, a length of 22m might be more convenient than 4m @7MHz as you may be able to use the 75Ω right to the radio.

Broadly it can be lengthened by integral electrical half waves, but the effect of loss becomes more significant on the tuning. Further, the longer the matching section, the narrower bandwidth.

There is also an intermediate solution where you make the dipole longer than a half wave to launch VSWR(75)=1.5.

But it is a narrow band matching solution

That is true, it is an efficient matching solution for a single band, and suited to the highest power permitted to ham stations.

But it is not a resonant dipole anymore

That is true, and if you ‘believe’ that is bad, there is little point presenting facts.

Reasoning will never make a Man correct an ill Opinion, which by Reasoning he never acquired.

Would I use it?

Certainly: An antenna for 7MHz local contacts but note that I used RG6 with a solid copper centre conductor.