Small Transmitting Loops (STL) are loops of less than about 0.1λ in diameter or about 0.3λ in circumference. Below these limits, the current around the loop is almost uniform and this permits a simplified analysis. (A stricter definition of 0.3λ in circumference could be argued.)

These antennas are ascribed all sorts of magic properties, low noise, able to create band openings when conditions are poor etc.

The efficiency of an STL depends on radiation resistance Rr and loss resistance Rloss. Efficiency η=Rr/(Rr+Rloss).

Radiation resistance of an STL is approximately proportional to the fourth power of frequency.

In a well implemented STL, almost all of the loss is conductor loss which is approximately proportional to the square root of frequency by virtue of skin effect. 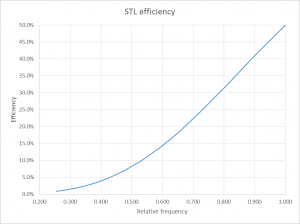 Performance typically drops quite quickly for loops less than λ/20 diameter at the operating frequency.

The most likely explanation for observations that these are low noise antennas is that they are inefficient, they have low gain.

Now you can improve on the configuration mentioned. You could increase the conductor size (conductor losses are approximately proportional to diameter), but the greatest improvement is from increasing the loop diameter. It is easier to do a lot worse with poor loop conductors (coax braid, small diameter wires), improvised lossy capacitors such as PCB, broadcast variable capacitors, coax line sections etc, though such loss had the benefit of increased bandwidth.

There are lots of articles on the magic of these things, but few have credible objective measurements that support the claims.

There is no magic.