I have written on Walt Maxell’s proposition about simultaneous system wide conjugate matching in antenna systems. I will repeat a little to set the context…

This is popularly held to be some nirvana, a heavenly state where transmitters are “happy” and all is good. Happiness of transmitters is often given in online discussion by hams as the raison d’être for ATUs, anthropomorphism over science.

Let us look at a very simple example in SimSmith.

This should not be taken to imply that ham transmitters are commonly well represented as a Thevenin source.

The load impedance has been adjusted for a nearly perfect match at the source. 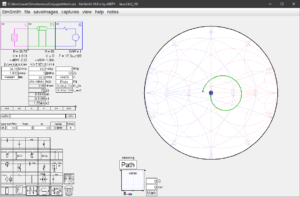 Above is the SimSmith model. The load R and X were adjusted for extremely low |Γ| at the source. |Γ| at the source is extremely low (0.0000173), Return Loss is 95dB, this is a match better than instruments could ever measure. We have achieved an almost perfect conjugate match at the interface between source and T1.

So let us now examine the impedance looking both ways at the load to T1 interface.

So at the load to T1 interface:

They are not conjugates of each other, not nearly, in fact the mismatch is characterised by Return Loss (in terms of the load Z) is just 14dB (or VSWR=1.5).

In this very simple configuration, a near perfect match at the source does not result in a similar quality match at the other node in the system.

Why is Walt wrong?

The problem is that Maxwell silently dropped from his statement (1) above the requirement that networks and lines must be lossless, and the example calculated here shows that Maxwell’s proposition does not apply to real world networks that have loss.

Walt Maxwell’s conjugate mirror does not apply in the real world, and the concept is of limited use in understanding real world antenna systems.

When you see people sprouting the Walt’s conjugate mirror you can expect that they have not read widely or thought about the subject much.