Having recently seen the suggestion that …

Most tools and most derivations of SWR will produce negative SWR reports because they are more interested in mathematics than in measurements you can make with a simple RF volt meter.

…, this article explores the expected voltage on a practical transmission line under two mismatch scenarios, voltage that ought be measurable with a simple RF voltmeter.

VSWR concepts… by the book 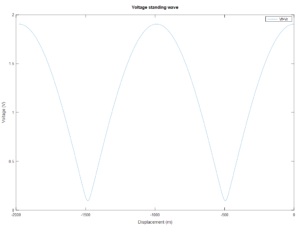 In this case the fully developed standing wave pattern repeats identically from load to source because the line is lossless, and in this case the VSWR can easily be calculated as the maximum voltage to the minimum voltage, all the maxima and minima are the same, so VSWR is unambiguously 20:1 or 20.

Drilling down to a more fundamental metric, we can plot the complex reflection coefficient along the line. 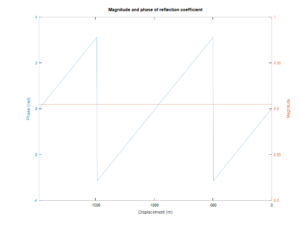 Above is a plot of the phase and magnitude of the complex reflection coefficient Γ. Note that the amplitude is constant (0.9048), but the phase varies linearly along the line.

Metrics derived from the magnitude of  Γ (|Γ|) such as rho (ρ), Return Loss (-20logρ), and VSWR will be constant along the line… so to speak of any of those quantities is unambiguous, they each apply anywhere along the line.

This is a pure mathematics exercise with no relevance to the real world because lossless lines do not exist in the real world. It is true though that sometimes approximating practical lines as lossless in certain scenarios may be a quite adequate approximation, but approximations do not determine fact.

Let us look at calculated values on a 1λ electrical length of practical transmission line at 100kHz. The choice of frequency is to expose effects that might be difficult to measure at higher frequencies where the loss per wavelength becomes lower.

The model uses Heaviside’s RLGC model for a transmission line, it is a lossy line having non-zero R and G terms. The line Zo has a significant imaginary component. 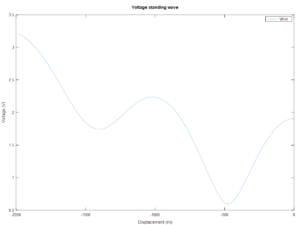 Note the difference to the chart for a lossless line. This is the same load, same nominal Zo, but now a practical lossy line.

A voltage standing wave is evident, as is the effect of line loss. The curve is a composite of an exponential decay in voltage due to line loss and superposed, the the reflected wave voltage which of course is also affected by line loss.

Given the definition of VSWR as the ratio of a voltage maximum to voltage minimum, what would you give as VSWR for this case?

VSWR is often calculated as a property of a point along a line (notwithstanding its definition), and the formula is given in most text books as VSWR=(1+ρ)/(1-ρ), and this would yield a curve for VSWR along the line. Likewise for Return Loss.

Whilst this is a calculated plot, it is the voltage that one would expect to measure along such a line under these source and load conditions. It is not simply a pure mathematics exercise with no relevance to the real world, it is a good mathematical model of the real world transmission line.

Load case 1 is a significantly mismatched load with a dominant imaginary part. 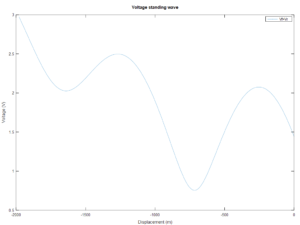 In broad form, the plot is similar to the last, and again we would expect to be able to measure along such a line under these source and load conditions. It is not simply a pure mathematics exercise with no relevance to the real world, it is a good mathematical model of the real world transmission line.

Let’s drill down on Γ. 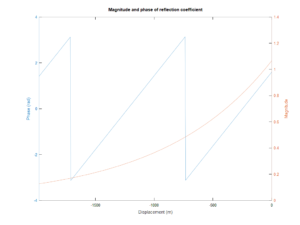 Above is a plot of the phase and magnitude of the complex reflection coefficient Γ. It is different to the case of the lossless line presented earlier as the magnitude of Γ varies along the line due to line loss.

But wait, look at the magnitude of Γ at the load, it is greater than 1.0. That has not given rise to an unrealistic voltage standing wave as plotted, in fact it is not very different to the purely resistive load case where Γ at the load was less than 1.0. 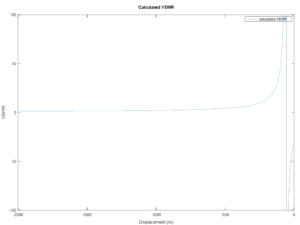 What is different is that for formula VSWR=f(ρ) will have a singularity where ρ=1 (VSWR=∞), and for ρ>1, calculated VSWR will be negative. Some will insist that this proves that ρ must never equal or exceed 1.0, but the problem is actually that that is a constraint of Distortionless Lines (of which Lossless Lines are a special case).

Another justification often given to argue that ρ must be less than 1.0 is that it implies that reflected power is greater than forward power, violating the law of conservation of energy. Sounds impressive, but it is due to flawed analysis of power on a line with complex Zo.

Some authors insist that negative VSWR is invalid and hide that the underlying conditions gave rise to negative VSWR. 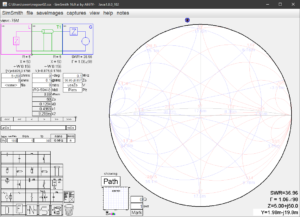 Above is a calculation from the popular SimSmith (v16.9) package. Note that the cursor is at the load which plotted on a Smith chart centred on the complex Zo from the T1 section is outside the outer circle. It is reported in the cursor data, and in the element calculations as having VSWR=39.96. In fact, it is easy to see that ρ>1, and that VSWR should be negative, it has been sanitised / corrupted. 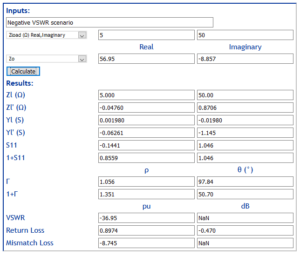 Above is a calculation of various metrics from the scenario Zload and Zo using accepted formulas, and it yields a negative VSWR, a warning that the scenario is one where common Distortionless Line assumptions for ρ, Return Loss, and VSWR are likely to be unsafe.

You might well ask what you can do with a cooked VSWR value, you cannot derive the value of ρ from it (ie there is no inverse function), you are in a fools paradise where you have a nice positive value that means nothing and masquerades as something that it is not.