A known issue with the common CNC6040 router and similar devices is very poor calibration / linearity of the spindle motor response to gcode Sx commands.

Above is the system block diagram. The grbl_ESP32 gcode interpeter processes a gcode S (speed) command, converting it to a variable duty cycle PWM waveform on parallel port pin 1. 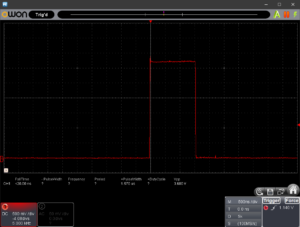 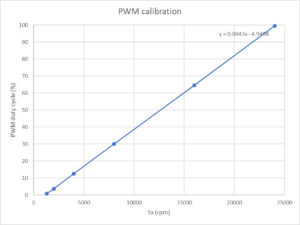 The first step in that path is quite linear, the graph above shows the relationship between measured PWM duty cycle and requested speed (Sx). 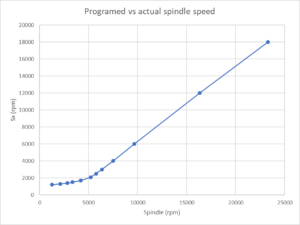 Above, the end to end response is quite non-linear.

A simple method of improving the response is to segment the measured curve into a number of segments where a straight line approximation will be sufficiently accurate. 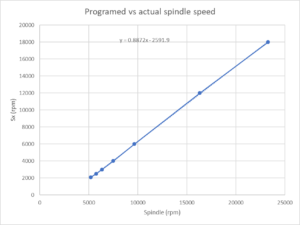 The same process was followed to obtain in all three segments.

First step was to make a minimal modification to the existing code to pull in a customer user calculation if such a file exists.

This is the change to the existing spindle_control_cpp to perform a conditional include of the user file spindle_curve.h (if it exists) at a key point in the calculation of the PWM duty cycle.

The next step is a user function that implements compensation of the non linear response as described above.

The code changes were implemented and tested. They work quite well, though at very low rpm the VFD drive calibration appears a bit unstable. Notwithstanding that, calibration is quite good from about 1500-24000rpm.

Note that the calibration coefficients used here are specific to the instance, and appropriate coefficients for other instances must be established by measurement as described.