An Antenna Tuning Unit (ATU) performs a simple but important function in many transmitting systems. 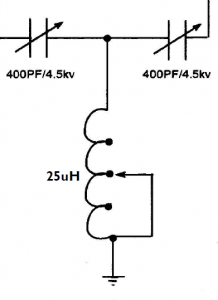 ATUs come in a range of configurations, each designed for a specific set of characteristics. Above is the heart of a Palstar AT2K T Tuner, just three real passive components that are fully explained by conventional linear circuit theory.

Transmitters are designed to operate into an antenna system as a load;

For example, the user manual for an IC-7000 states:

Use well matched 50-ohm antennas and coaxial feedline. An SWR (standing wave radio) of 1.5:1 or lower is recommended when transmitting.

The need for an ATU

Antenna systems may have a wide range of impedance, some may be designed for a nominal impedance of 50Ω, others may not.

Some form of impedance transformation is required to adapt an antenna that departs significantly from 50Ω to a transceiver such as the IC-7000 mentioned above.

Lets say we have an antenna system where the impedance looking to the coax feed line is 40+j50Ω (that means an equivalent impedance of 40Ω of resistance in series with 50Ω of inductive reactance) that we want to use with an IC-7000 at 7MHz.

One measure we might consider is to insert some capacitance in series with the centre conductor of the coax. If we chose a capacitance with reactance of -50Ω, it would oppose the load’s inductive reactance of +50Ω, and in fact cancel it completely leaving a load impedance of 40+j0Ω which has VSWR(50)=1.25. This is within Icom’s recommended range, and is a solution to the problem. This capacitor might be a variable capacitor and it is simply adjusted for minimum VSWR indicated on the IC-7000’s meter.

However, whilst is might be an adequate solution for this particular load, the range of loads for which this might be a reasonable solution is quite small and a more generalised device might be considered.

An ATU that uses two variable components, an inductor and capacitor is much more flexible, especially if the  configuration of those parts can be changed with jumpers or switches. This is called an L Tuner.

Using the same example, a series capacitance of 324pF from the transmitter to the coax and a shunt inductor of 2.26µH on the transmitter side of that capacitance will transform the load impedance of 40+j50Ω to 50+j0Ω for VSWR(50)=1.00. This exactly meets Icom’s 50Ω requirement.

There is a lot of merit in L Tuners, particularly efficiency, but the switching arrangements and need for relatively large capacitors and inductors is a disadvantage.

Another common configuration uses three variable components, an inductor and two capacitors in a high pass T configuration. It is even more flexible. This is called an T Tuner.

Using the same example, a series input capacitance of 250pF (the max for our example ATU), a shunt inductance of 1.26µH and series output capacitance of 167pF to the coax transforms the load impedance of 40+j50Ω to 50+j0Ω for VSWR(50)=1.00. This exactly meets Icom’s 50Ω requirement.

Mathematically, the input impedance to the T-Tuner ATU is calculated as ((Zc2+Zload)||Zl)+Zc1. The above solution is not a lossless solution, it is a real world solution and assumes Ql=100 and Qc=2000. The maths is not difficult, but you can easily verify the solution in the T-Network Tuner Simulator.

Above is the solution to Zin=((Zc2+Zload)||Zl)+Zc1 using Excel to perform the calculations. Solver was used to find the settings for match. No wave theory, no reflections, just standard linear circuit analysis.

Over time, various Hams have invented the most involved explanations of these things based on quasi time domain / quasi frequency domain explanations with travelling waves and partial reflections, and none of them complete, They have proposed that ATUs are re-reflectors of reflected waves.

The disciples have applied the Jacobi Maximum Power Transfer Theorem to a network that is not a linear network (due to the source properties), they have waxed on about maximising output power yet the target of the instrument used to adjust the ATU is almost input impedance.

There is no simpler way to analyse these things than simple linear circuit theory as demonstrated above. Prof Schmidt’s simulator (Schmidt 2003) just uses plain old linear circuit analysis and comes up with valid practical answers for real components.