A question that arises from time to time is what is the minimum receiver noise figure for a given application.

This discussion considers the question applied to linear receivers, ie receivers with zero intermodulation distortion (IMD) and other non ideal characteristics, other than their internal noise which can be described by their Noise Figure (NF).

By definition, NF is the amount by which the component or system degrades the NF, so in dB it is the difference in the S/N in to S/N out. Implicit in that definition is that it is based on source internal noise of 290K equivalent.

By convention, ambient noise (or external noise) is expressed in Kelvins, or dB wrt 290K. That does not imply that an antenna contributes exactly 290K.

So, there are two factors that influence the extent of degradation, the ambient noise, and the receiver internal noise. 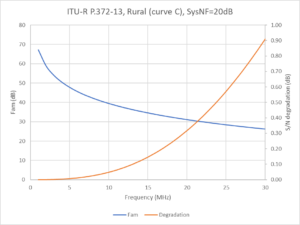 The chart above shows the expected median ambient noise figure in Rural precincts from ITU-R P.372-13, and the calculated degradation in S/N ratio caused by internal noise of a receiver with NF 20dB (which is about what might be expected with the PREAMP OFF).

The situation would be very different for an antenna pointed horizontally as Tam would be a lot higher, and site dependent.

We can calculate the degradation in S/N caused by receive system internal noise, and that should drive considerations about how good the receiver needs to be.

The discussion has assumed a linear receiver (zero IMD), and presence of IMD will add noise to the system, further degrading S/N. Measures to reduces susceptibility to IMD, even where they seem to reduce sensitivity, may result in improved S/N recovered.