I repaced the R134a refrigerant in my car aircon system with a hydrocarbon refrigerant, Hychill Minus 30 (HC-30).

Research had indicated that permeation of reduced barrier hoses was problem with HC refrigerants. The hoses in the car were Goodyear hoses with catalogue numbers, but I was unable to find data on them. Their diameter was comparable to standard barrier hoses, so I proceeded with the trial.

The Hychill Minus 30 performed very well, and was generally easy to handle though being aceotropic, charging must always be done with liquid and of course precautions in handling a highly flammable refrigerant.

Unfortunately performance faded down within a few months, apparently loss of refrigerant. Keeping in mind that this system was 15 years old with no maintenance, and had shown loss of R134a which was the stimulus for replacement.

The system was recharged with HC-30 and careful observation for leaks made over coming days and weeks. No leaks were detected around the shaft seal, case o-ring seals, or any pipe fittings, but quite high levels of gas were observed near the rubber hoses, particularly at the U bend on the high side hose, and most parts of the low side hoses. Permeation is the issue. 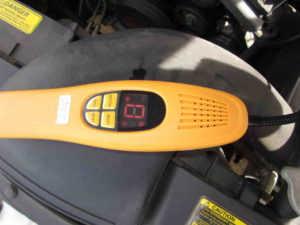 It was not practical to replace the reduced barrier hose sections with standard barrier.

The system was purged, evacuated and charged with R134a and performance evaluated. Again it was inspected for signs of gas leak using a gas detector over days and months, and there were no traces after about three days (presumably absorbed HC still leaking from the hose material).

After 4 months, performance is good and there has been no sign of leak.

An interesting experiment, but foundered on the hose type which could not be established to be the necessary standard barrier type, though it was of similar diameter.