Recently I have had difficult reaching the local DMR repeater on 70cm, and needed to check that the antenna system had not deteriorated.

I took a baseline measurement with an AA-600 after some refurbishment work in Jan 2018, and was able to compare a current sweep to that baseline. 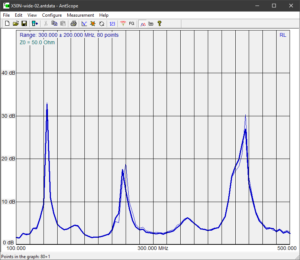 Above, a wide Return Loss sweep of the Diamond X-50N with feed line compared to the baseline (the thin blue line).

By and large they are almost identical, save small departure around 435MHz. 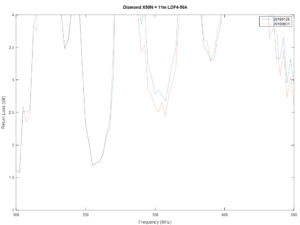 It is worth remembering that the AA-600 operates on second harmonic above 200MHz, so the measurements become a little noisier.

Importantly, the out of band Return Loss is almost identical and this would not be so if feed line loss had degraded (eg due to water ingress), so there is no evidence to suggest that the feed line had degraded. 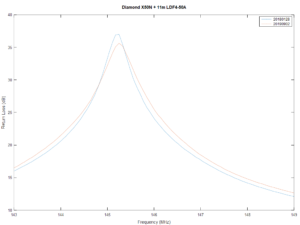 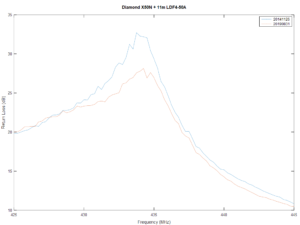 Above is a narrower sweep around the normal operating frequencies. There is a small degradation in Return Loss which is probably attributable to temperature differences of more than 20° between measurements.

So, the comparison with the archived baseline gives no cause of concern, the antenna system is probably unchanged.

Why not just measure the VSWR?

Well, in fact I have done just that at 80 frequencies over a wide range, in-band and out-of-band, if you like. That captures much more information than VSWR measurement at one or a few frequencies. 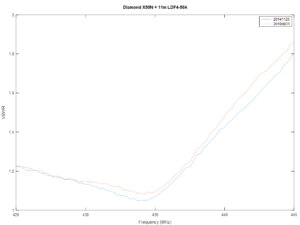 The traditional ham approach is the measure VSWR at the operating frequency and focus on that, but that is unlikely to be very sensitive to some types of transmission line degradation (eg increased loss). 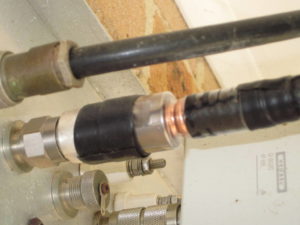 I have a clear window that shows if water has leaked down the cable. It should not leak down the inside because it is closed cell foam, but it should indicate if the birds pick a hole in the jacket… and possibly the copper.