Some time ago I wrote some articles on so-called Coax Traps, and an example design of an Inverted V dipole for 80 and 40m. 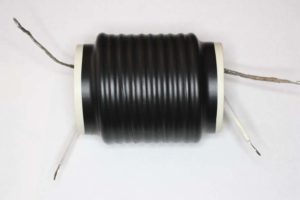 A coax trap (before cross connection).

The whole subject of trapped antennas elicits a lot of online discussion that is often more about semantics than understanding. 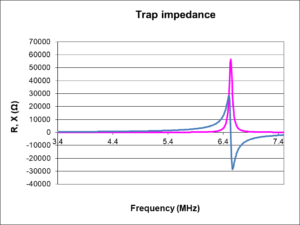 A trapped dipole for 80m and 40m using bootstrap coax traps used a coax trap that is resonant at about 6.5MHz. 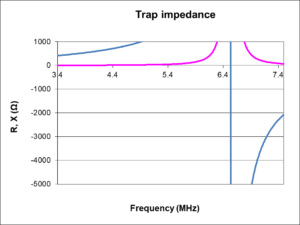 Zooming in a little, we can see that the traps have a modest inductive reactance at 80m (400 – 500Ω) and a largish -ve reactance around 40m (-4000 – -3000Ω). In concert with the wire length and configuration, this results in VSWR minima in the 80m and 40m band, fairly low structure loss, and a pattern largely like an Inverted V dipole of half wave length.

You could fret about the series resistance component of trap Z, but at the end of the day, what is important is how much power is lost in the structures (dipole wire, traps) and in this case dipole + trap loss is less than 0.5dB at 40m, comparable to the coax feed line loss. The situation is a little worse on 80m where it is a shortened loaded dipole, but loss is still quite low (<1dB in antenna structure).

This design was built and tested, and worked pretty much to the model predictions. It demonstrates that a lot of notions about trapped dipoles are flawed.