At (Bertelsmeier & Magnin 1992) formulas are given for calculating G/T from Sun/ColdSky Y factor in several Ham bands, and solar flux at 10.7cm.

The factor I is λ^2*Φ/(8*π*k) where λ is wavelength of the measurement, Φ is solar flux at that wavelength, k is Boltzmann constant.

The authors give a set of approximations for I in terms of solar flux at 10.7cm, based they say on a polynomial curve fit on experimental data. They do not give further information on their approximations. 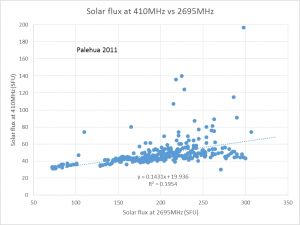 Above is a scatter diagram of observations at the Palehua observatory during 2011 of solar flux at 2695MHz and 410MHz.

While these frequencies are not exactly those used in (Bertelsmeier & Magnin 1992), they are in almost the same ratio as 2800MHz and 432MHz (their formula 3), but displaced about 4% lower in frequency. They probably have very similar characteristics to 2800MHz vs 432MHz.

Examining the chart, there is obviously some relationship between the values, but the question are what is it, and more importantly, how strong is that relationship.

Fitting a simple linear relationship gives the formula SF410=0.1431*SF2694+19.936 as shown on the chart, but the more interesting statistic is the correlation coefficient R^2=0.1954. It is generally accepted that strong relationships are indicated by R^2>0.8, and that below that, any relationship is weak. The R^2 for this curve fit at 0.1954 is stunningly low and indicates to me that there will be large uncertainty in using the linear model.

Nevertheless, I have calculated the RMS error in using the model to predict the 341 data points in the original dataset, and it is 16.7SFU. This is an appalling error which in terms of calculated flux around 40SFU is an error of 3.8dB at 1σ confidence interval, even worse at higher confidence. 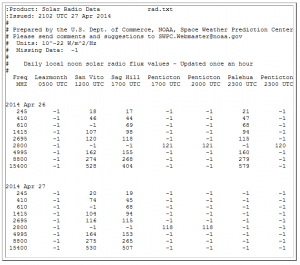 Above is the raw data from NOAA. 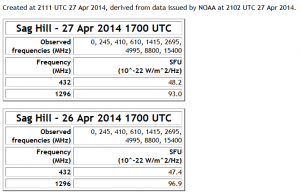 Above are the interpolated flux values at 432 and 1296MHz using Quiet sun radio flux interpolations.

On the basis of this analysis, I would expect (Bertelsmeier & Magnin 1992) to be subject to similar uncertainty, and the uncertainty is too large to be used to verify small improvements or otherwise in a system.

Their approximations may account apparent errors in many analyses done by Hams, and may be embedded in calculation tools that users apparently do not understand and have not verified.