If we were to use a probe to directly measure the magnitude of line voltage, we would expect the following. 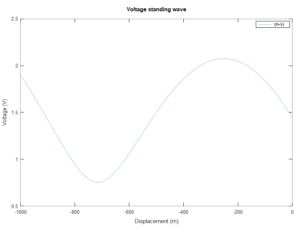 If you put a ruler to it, you might estimate the VSWR over that region to be around 2.8. But, note that you cannot directly measure VSWR at a point, it is not a point property in the general case. 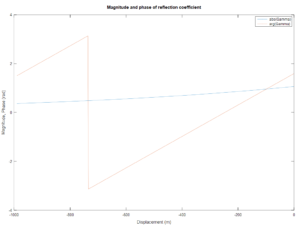 Above is a plot of the calculated magnitude and phase of the complex reflection coefficient Γ, displacement is negative from load to source.

There is nothing particularly anomalous about this data, except that ρ, the magnitude of the complex reflection coefficient Γ, is just a little greater than unity at the load (0m displacement).

There is a point where ρ=1. If you try to calculate VSWR=(1+ρ)/(1-ρ) there is a singularity at ρ=1 and it yields the following plot. 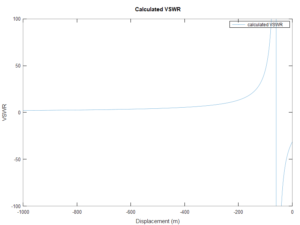 Above, notwithstanding that VSWR is not a point property, a plot of calculated VSWR at points along the line using the lossless line formula. The singularity where ρ=1 causes extreme values of VSWR either side of it.

The chart shows calculated VSWR way higher that implied by visual interpretation of the standing wave plot given earlier.