Some components used for SSB telephony need not be capable of handling the Peak Envelope Power (PEP) continuously, many components for instance respond to the average power (Pav) which is quite less. Essentially, components that are subject to voltage breakdown (usually as good as instantaneous) must withstand the PEP, those that heat relatively slowly must withstand Pav.

In estimating the power dissipated in components due to an SSB telephony waveform, a good estimate of the ratio of Average Power (Pav) to Peak Envelope Power (PEP) is very useful.

Long before hams had used SSB, the figure has been of interest to designers of FDM or carrier telephone systems to size amplifiers that must handle n channels of FDM multiplex without overload which would degrade S/N in other channels of the multiplex. The methods are applicable to SSB telephony, it uses the same modulation type and the overload challenges are the same. 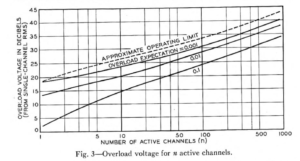 (Holbrook and Dixon 1939) gave the graph above which characterises the ratio of instantaneous peak to RMS voltage of voice telephony for different numbers of channels in a multiplex and different expectation of overload or clipping. They recommend a very low probability of clipping at 0.1% to avoid significant intermodulation noise in adjacent channels.

We are interested in the single channel case, n=1, and we must subtract 3dB from the vertical axis readings and negate them to obtain the ratio of Pav/PEP.

The effect of speech processing or speech clippers is to increase Pav/PEP, for example supplying 6dB higher input audio level (commonly spoken of as 6dB compression) will raise Pav, but by less than 6dB.

So, for the purpose of rating safe dissipation of components with relatively long thermal time constant that effectively averages the power is to rate the Pav as 10dB lower than PEP so including a reasonable allowance for sensible compression.