The article Estimating the Insertion VSWR in a ferrite cored RF transformer discussed the importance of sufficient magnetising impedance to InsertionVSWR at low frequencies.

Above is a low frequency equivalent circuit of a transformer. Although most accurate at low frequencies, it is still useful for RF transformers but realise that it does not include the effects of distributed capacitance which have greater effect with increasing frequency.

The elements r1,x1 and r2,x2 model winding resistance and flux leakage as an equivalent impedance.

An approximate equivalent circuit can be obtained by referring secondary components to the primary side (adjusted by 1/n^2) with an ideal 1:1 transformer which can then be deleted.

Flux leakage (and leakage impedance) is higher with lower permeability cores, it is worse with spread out windings (as so commonly shown) and worsened by the Reisert cross over winding configuration (again used without obvious reason). Popular designs of high ratio transformers (eg n>3) typically tightly twist for the first primary and secondary turns for reduced flux leakage, but again without evidence that it is an improvement and in my experience an autotransformer configuration has lower flux leakage and is simpler to wind. 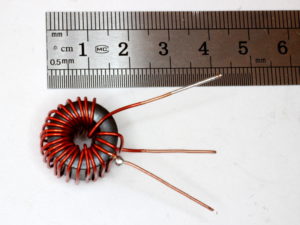 The transformer above is wound as an autotransformer, 3+21 turns, ie 1:8 turns ratio, and the winding is not spread to occupy the full core, it is close wound (touching on the inner parts of the wind).

The effects of the series leakage impedance can often be offset to some extent by a small capacitor in shunt with the input, and due to the complexity of the characteristic of leakage impedance and distributed capacitance, is often best found by substitution on a prototype transformer. 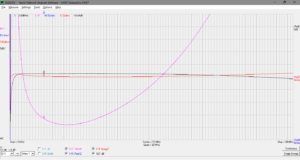 Above is a sweep of the uncompensated nominal n=8:1 prototype ferrite cored transformer with a 3220+50Ω load.

A 100pF silvered mica was connected in shunt with the transformer primary. This is not an optimal value, benefit may be obtained by exploring small changes to that value. 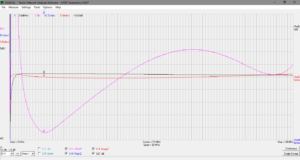 Above is a sweep of the roughly compensated transformer. The capacitor makes very little difference to the low frequency behavior, but it reduces the input VSWR significantly at the high end. VSWR<1.8 over all of HF. Compensation is not usually adjusted for response at a single frequency, but for an acceptable broadband response (as in this case).

Note that the compensation capacitor needs to be high Q for good efficiency, and it should be rated to withstand the applied voltage with a safety margin adequate to the application.

Whilst this example shows the compensation evaluated on a bench load, compensation on a typical antenna system is more relevant to those applications.