The ratings for rectifier diode currents are often expressed in terms of a steady (ie DC) current, yet when used as a power rectifier with capacitor input filters, the current is very different. 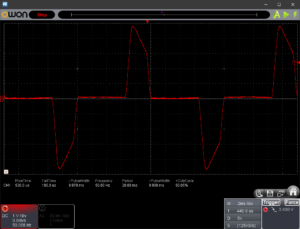 Above is capture of the rectifier input current for a lab power supply set to 1A load current, the scale factor for the current probe is 1V/A.

A conservative approach to selection of diodes is to choose them based on the RMS current flowing through them.

Datasheets specify the current rating of diodes in various ways and must be interpreted intelligently.

In a bridge rectifier, Iav of each diode is half the DC load current, so these diodes could be used at up to load current of 2A under the conditions stated (resistive load). The form factor for a half wave rectified sine wave is 1.11, so Irms into a resistive load etc is 1.11A, and therefore for the bridge rectifier, Irms is 2.22A. The 1n4004 is barely adequate for the example waveform which is 2.02Arms for 1.1A DC output.

The PA40 is a 15A rated bridge rectifier. 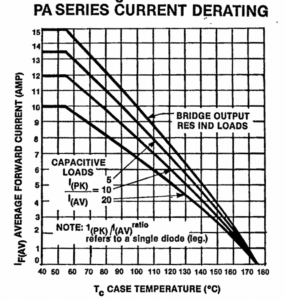 Above is a derating chart from the PA40 datasheet.

In the example waveform, Ipk/Iav=5/1.14=4.4, we will use the Ipk/Iav=5 curve. Following that curve, it can be seen that at 80° case temperature, the bridge is rated at 11A, derated due to waveform and case temperature.

Note that for discussion purposes, we have used the waveform for 1A load current. In designing a rectifier, you would use the waveform at maximum current, observed using the intended transformer and filter capacitors which all have a bearing on the waveshape.

The VKPowermate II design was published in Electronics Australia, a hobby magazine.

The design called for a bridge of 3A diodes and provision was made on the PCB for them. They were renowned for diode failure, followed by serious damage to regulator parts and PCB.

Given this history, I built mine with a PB40 (nominal 25A) bridge. 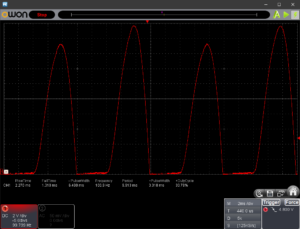 Above is the (full wave) rectifier output current, 1A/V @ 6A DC load current. The calculated RMS current for each diode is 4.8A, way too much for a nominal 3A diode (eg 1N5404) and probably near doubling the diode dissipation explaining observed high failure rate of the design.

As an aside, the diodes in the bridge appear to be mismatched with one half cycle contributing more current.

An example, the PB40 often appeared in 25A DC power supply projects, and with a capacitor input filter and case temperature of 100°, the current rating is more like 15A (depending on the other components that determine peak current).