K5SO published an article in which he reported measurements of Sun noise rise over cold sky for K5SO, W2UHI and VK7MO. 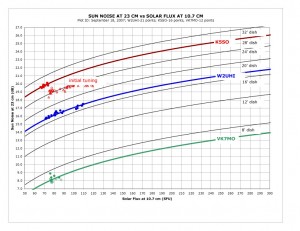 Above is his graphical summary of the measurements.

This article concentrates on just the measurements of K5SO station and the underlying model.

It is worth noting that the observations of all three stations fall within less than 25% of the range shown in the graph… so most of the graph is an extrapolation, and over a relatively huge range.

Note that he defines SF to be the solar flux at 2800MHz whereas the noise measurements are made at 1296MHz.

For the purpose of this article, I will refer to K5SO’s quantity SN as Y, the ratio of noise pointing at the Sun to that pointing to cold sky.

The power received when pointing to the Sun includes both noise due to the Sun itself (lets call it Th) plus other noise, external and internal to the system (lets call that Tc). 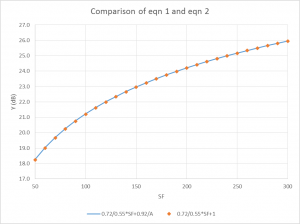 Above is a comparison of the two formulas. A value of A=0.55 has been used to calibrate to K5SO’s curve. 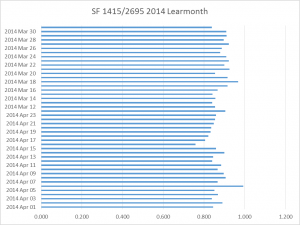 Above is a comparison of SF at 1415MHz compared to 2695MHz as measured at Learmonth observatory over 45 days in 2014. Clearly there is not a fixed relationship between them (they are produced in different parts of the chromosphere), and there is likely to be a somewhat similar variation in solar flux at 1296MHz compared to 2800MHz if one was to measure it.

Using 2800MHz SF just adds statistical noise. Whilst solar flux is not measured in these observatories at 1296MHz, they measure a number of frequencies and It should be better to use a sensible interpolation of those measurements. 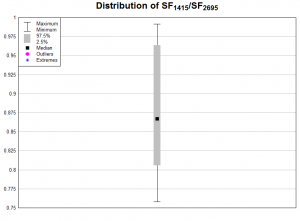 Above is a plot of the distribution of the ratio of solar flux at 1415MHz to 2695MHz for the same data. This variation would give rise to 3σ uncertainty of 0.5dB, a little worse probably for the actual case of 1296MHz from 2800MHz, a significant amount which can easily be reduced subtantially by a better projection of 1296MHz from the observatory data.

K5SO gets a Y factor of about 21dB when 2800MHz solar flux is 100SFU. If we were to assume that at that time, solar flux at 1296MHz was say 85SFU, we can calculate G/T=20dB/K (making a beamwidth correction for a 39dB dish). Assuming antenna gain to be 39dB, that indicates a system noise temperature (Tc) of 78K which is credible. 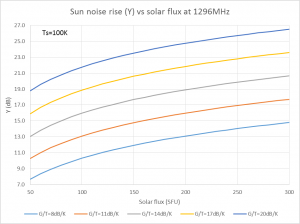 So, above is a graph similar to K5SO for a family of G/T values. The graph is constructed using the technicque and formulas given in Measuring G/T. (One must apply a beamwidth correction factors for narrow beamwidth antennas, and in the above chart that is calculated based on G/T and an assumed system noise temperature Ts.)

The similarity of the above chart and K5SO’s shows that conventional theory underlies K5SO’s experimental observations.