The UC3SFL charger for my Hitachi DB3DL2 screwdriver departed this world after just 8 years with a bang, several parts around the main switching transistor deposited as soot inside the cover. 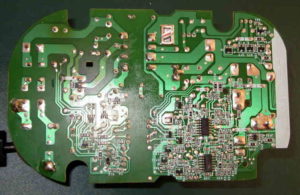 Above is a view of the underside of the charger board, it is very complex, lots of parts, and there are lots of parts on the topside. Ouch, this is going to be expensive.

Yes, it is the replacement power supply is more than half the price of complete tool with two batteries (~$200)… so that is not on.

The screwdriver’s LED control board has already failed (probably a low grade Chinese electrolytic capacitor) and had to be removed as it would switch on spontaneously and flatten the battery. The hole left vacant by the removed push button provides a convenient exit for a charger cable. 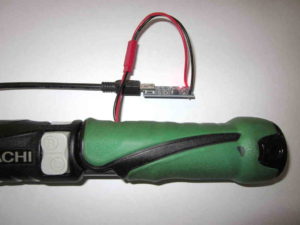 A short silicone cable with JST RCY connector (common radio control battery connector good for 3A) was wired across the battery contacts.

Also shown is a TP4056 USB charger board for single cell Li Ion battery, ~$1 on eBay (plus another JST RCY cable). This combo will charge from an ordinary 1A USB power supply. 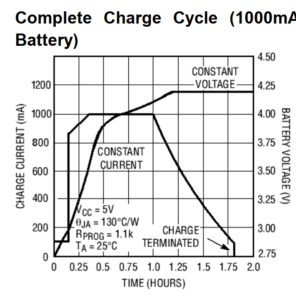 Above is the charger characteristic from the datasheet. These batteries are 1.5Ah, so we should expect the constant current phase extended by  0.5h for a total charge time of well under 3h. I can live with the slower charge time, and it is better for battery life anyway.

Much as it was a very good screwdriver in many respects, it has failed twice now in under 8 years with little use, way too expensive in whole of life costs. Much as it is a Japanese brand, it is Chinese Quality (bit of an oxymoron).