This article explains how to measure G/T using the Sun.

A metric that may be used to express the performance of an entire receive system is the ratio of antenna gain to total equivalent noise temperature, usually expressed in deciBels as dB/K. G/T is widely used in design and specification of satellite communications systems.

The utility of G/T is that receive S/N changes dB for dB with G/T, in fact you can calculate S/N knowing G/T, wavelength, bandwidth and the field strength of the signal (Duffy 2007).

S/N=S*λ2/(4*π)*G/T/(kb*B) where:
S is power flux density;
λ is wavelength;
kb is Boltzmann’s constant; and
B is receiver quivalent noise bandwidth

Usage in this article is consistent with the industry standard meaning of G/T given at (ITU-R. 2000) (as opposed to the meaning used by some Hams who have appropriated the term for their own purpose).

The expression above can be rearranged to make G/T the subject, and if S/B is replaced with the known power flux density of a celestial object, measurement of S/N or Y factor (hot to cold sky) allows calculation of G/T.

Note that published figures for power flux density for celestial object are usually for a randomly polarised signal and they must be halved to determine the power received by a linear or circularly polarised antenna.

ITU-R S.733-2 gives details of corrections that may be needed.

The Sun is a relatively high intensity source, and though its flux density is not sufficiently predictable, it is measured at several frequencies at several solar observatories each day at local noon and those measurements can be applied to Y measurements taken at about the same time.

The calculator embedded in Quiet sun radio flux interpolations can be used to fetch recent data for any of the observatories and calculate cubic spline interpolations to intermediate frequencies (eg Ham bands). It is a mistake to use the published 10.7cm flux figures, or simple extrapolations for this purpose, see (Duffy 2009).

A technique then is to find the recent solar flux values for the frequency of interest and predict the Y factor from modelled G/T to ensure that the measurements are practical (ie that expected Y can be measured with good accuracy, it isn’t too small or too large).

Measure Y several times around noon and find the highest value of that can be consistently obtained as the best capture of quiet solar conditions, and record all details of the experiment.

Later, use Quiet sun radio flux interpolations to get the measured noon solar flux at the observatory nearest to you and record it.

Then calculate the G/T figure from all the information you have… and share it. Very few hams share reliable G/T measurement data for their station, it is helpful to others in understanding the state of the art. 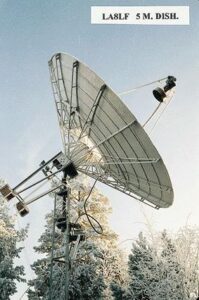 LA8LF gives information on the performance of his 1296MHz station with 5m parabolic dish including that the receiving system measures 16.5 dB of Sun Noise with a flux of 71.

Let us estimate the antenna gain assuming aperture efficiency of 60% to be 34.4dB. This will give rise to a very small beamwidth correction factor, 0.04dB.

Assuming that the solar flux reported is correct (ie for 1296MHz and concurrent with his measurements), and that the 16.5dB Y factor is accurate, we can calculate G/T to be 16.0dB/K.

A G/T model was constructed of the station. 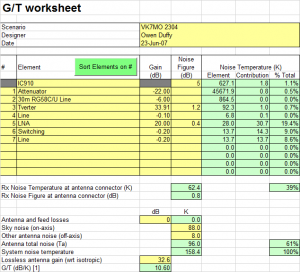 From G/T and current solar flux, Y was expected to be around 10dB, accurate measurement was quite feasible.