The so-called End Fed Half Wave (EFHW) has become very fashionable amongst hams. The idea of end feeding a half wave antenna is hardly new, and there is widespread use of the broad concept… but from online ham discussion, it can be observed that the things are not well understood and indeed, there is magic about them.

A simple model of a simple antenna

This article presents some NEC-4.2 model results for a 7MHz λ/2 horizontal 2mm copper wire at height of λ/4 above average ground.

The model is impractical in a sense that it does not include unavoidable by-products of a practical way to supply RF power to the antenna, but it is useful in providing insight into the basic antenna.

The NEC model has 200 segments, and varying the feed segment gives insight to what happens to feed point impedance. 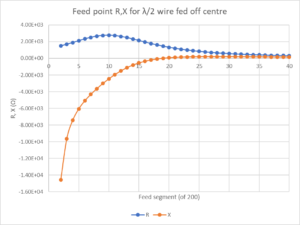 Above, it can be seen that as the wire is fed closer to the end (segment 1), feed point Z includes a rapidly increase capacitive reactance.

The very large series reactance close to the end makes feeding at those points impractical as any impedance transformation network needs to deliver power to a very reactive very high impedance load.

Let’s analyse the antenna at a feed point that is close to the end, but a compromise for more practical feed point impedance. We will look at the case at segment 10 (1m from the end) which is 5% of the dipole length or 2.5% of wavelength. 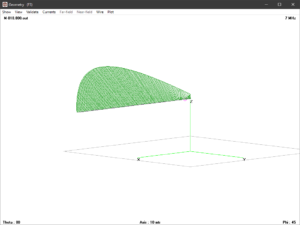 Above is a 3D magnitude and phase current plot from 4NEC2. It can be seen that there is a significant change in phase near the feed point. 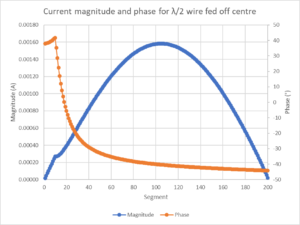 Above, the magnitude of current an phase are plotted.

The chart above shows that the magnitude of current is close to a sinusoidal distribution, but there is a glitch near the feed point… but more importantly there is a significant variation in phase in the last quarter wavelength, culminating in a discontinuity at the feed point.

The current distribution is not the same as a centre fed half wave dipole, though it is somewhat similar. 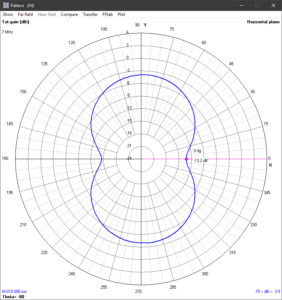 The gain pattern at 10° elevation shows some asymmetry, not large, but evidence again that the thing is not exactly the same as a centre fed half wave dipole, but somewhat similar.

The radiation efficiency of the modelled system is 75%, it has no feed or impedance transformation losses factored in, just conductor loss (which is very small) and ground loss.

An NEC-4.2 model of a 7MHz λ/2 horizontal 2mm copper wire at height of λ/4 above average ground reveals:

1 highlights the impractical nature of feeding such a ‘pure’ antenna very close to the end.

2 questions the assumption that underlies most discussions of an EFHW that it works identically to a centre fed dipole as even in this ‘pure’ form, the current distribution is not exactly the same.

Further articles will explore the effects of popular practical feed arrangements on the system.