Whilst these have been quite popular with VHF/UHF antennas, the question arises as to how they work, and whether they are effective in reducing common mode current IIcm) for a wide range of load scenarios.

To find an answer, and NEC model was constructed of an OCF half wave dipole a half wave above a perfect earth conductor, vertical feed line to ground, and the current magnitude and phase for all conductors evaluated. 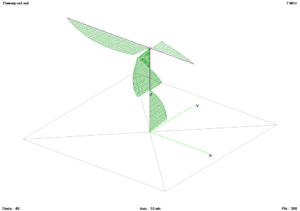 Above is the current plot. Note that horizontal conductors are defined from low X to high X, and vertical conductors from low Z to high Z.

This antenna acts more like a top loaded vertical monopole than a horizontal dipole. 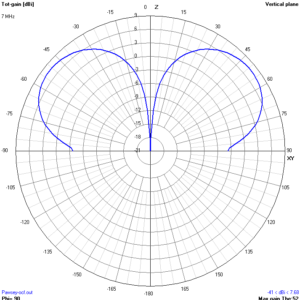 Above, the radiation pattern reinforces the view that it is behaving as a top loaded vertical monopole.

In this scenario, the Pawsey Balun has not effectively suppressed common mode current (as would a good current balun), indeed it seems to facilitate it (as a good voltage balun would).

The Pawsey Balun as shown in the diagram is not of itself either a good current balun or a good voltage balun.