In brief, a white noise source is connected to the receiver input, Filter2 (nominal 2400Hz bandwidth sharp response) selected and set to standard PBT, and the audio output captured on a PC based audio spectrum analyser, Spectrogram 16 in this case. 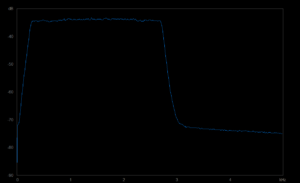 Above is the spectrum plots, as receivers go this is relatively flat, lacking the usual tapering off above 1kHz (a technique to cheat on sensitivity specs).

The spectrum plot was analysed with sl2enb to produce the following summary.

The important figure is ENB=2313Hz wrt 1000Hz reference frequency. This means this admits the same amount of noise power as a rectangular response of 2313Hz width and gain the same as the actual filter at 1kHz.

For noise power calculations, the ENB of 2313Hz is 0.16dB lower than the nominal filter bandwidth of 2400Hz.