A low Insertion VSWR high Zcm Guanella 1:1 balun for HF – more detail #3 discussed compensation of the Insertion VSWR response of a balun which in that case was wound with coax.

A correspondent wrote of his project with a Guanella 4:1 balun where each pair was wound with a pair of insulated wires, and importantly the output terminals are free to float as the load demands. A Guanella 1:1 balun wound in the same way has the same characteristic.

To preserve balun choking impedance, it is best to preserve balun symmetry, and the use of a short open circuit coaxial stub across the output terminals for InsertionVSWR compensation introduces some asymmetry. 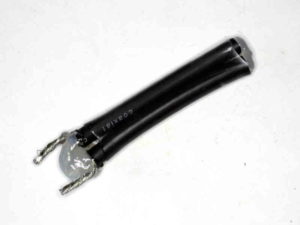 An alternative construction with coaxial cable that is more symmetric is shown above.

It is two pieces of RG58 with the shields fanned out and twisted into pigtails which will be the two terminals of the device. The inner conductors are connected across to the other cable’s shield. The cross connects are kept separated, as are the shield ends, and the space if filled with hot melt adhesive (which is electrically similar to polyethylene). Likewise, I have made sure the cut ends are clean of whiskers and used hot melt adhesive to insulate the parts from each other.

The prototype withstood 2.2kVp and the weak point was the open ends of the RG58. RG58 is strong internally, flashover occurs across the ends… so whilst the neatest smallest pigtails are good for RF, they are not conducive to high voltage withstand. By stripping the braid back 5mm and separating the braid ends similarly, it withstands 4.5kVp. Most ham ATUs cannot withstand even 2kVp, even though the capacitors may be rated for higher voltage, they tend flash over at coax connectors.

How does it work?

There are three open circuit transmission line stubs in parallel.

The first is formed by the outer surfaces of the two pieces of parallel RG58 with PVC jacket insulation. This turns out to have Zo close to 50Ω and VF around 0.6-0.7.

The second and third stubs are formed by the inner of each of the two pieces of RG58.

Because the three TL sections are close to Zo=50 and VF=0.66, we can treat them as a single stub with Zo=16.7 and VF=0.66. It is an approximation, but a good one considering the relative magnitude of error due to the pigtails when used on very short stubs as in this case.

In my correspondent’s case, his 70mm single RG58 stub could be replaced with the triple stub of length 20-25mm, enhancing symmetry by both the symmetric structure and smaller size.

Does it stack up? 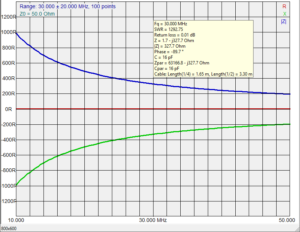 Above is a measurement of the prototype. The observed capacitive reactance reconciles with 55mm of Zo=16.7 and VF=0.66 TL.