EMRCalc v9.09 contains a facility to fetch a current report of quiet solar flux from an online source. 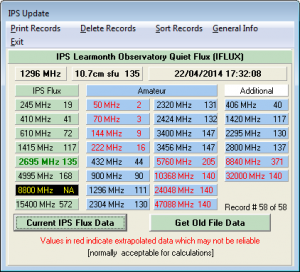 Above is a sample report. 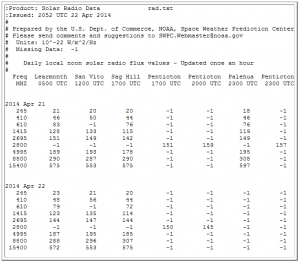 The report above was fetched from NOAA, and contains Learmonth data for the same day, 22nd April.

The immediate issue is that the figures are different, though represented as being from the same source. 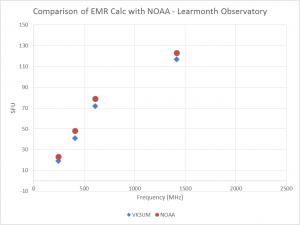 The difference is not huge (0-17%), but one is left wondering why two source of the same information differ at all.

The first figure shows some calculated values for the Ham bands. 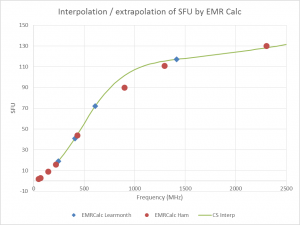 Above is a chart of EMRCalc’s Learmonth figures, and the interpolated / extrapolated values for the Ham bands. The Ham band values appear to be linearly interpolated between the observation data (a linear spline), the values at 900 and 1296MHz show that fairly clearly.

The problem with linear spline is that there is a discontinuity at each observation point, the slope of the interpolated characteristic changes instantly other side of the observation and this is most unlikely to happen in nature… ie the technique may not be a good estimator. The EMRCalc estimate for 900MHz is about 10% lower than a cubic spline estimate.

The estimates below 245MHz are clearly extrapolation in that they are outside the observation data. They appear to be on some kind of curve.

There appears to be no hints in the documentation in the methods used for interpolation and extrapolation.

Using a cubic spline interpolation on the NOAA Learmonth dataset gives a solar flux figure 9% higher for 1296MHz than in the EMRCalc report for the same time.

Though there are several solar observatories around the world reported in the NOAA report, it seems EMRCalc uses only one. It may be that if your interest is in solar flux in another part of the world, noon observations from an observatory nearer your own location might be more accurate, eg for European locations, San Vito data might be better. 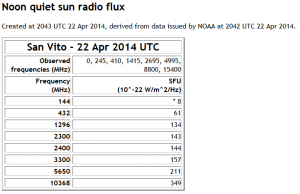 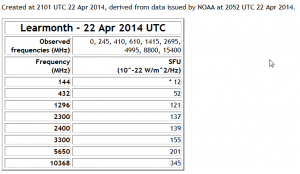 Above is the NOAA data for Learmonth using the same interpolation methods. The values obtained are different to EMRCalc.

A follow up on the reconciliation issue of solar flux stats. 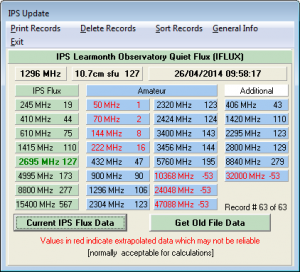 Above is the solar flux statistics in EMRCalc immediately after an update. The datestamp turns out to be that of the time of update, not that of the underlying data. 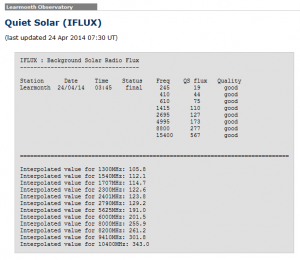 Above is the IFLUX report from Learmonth’s website at about the same time. The data reconciles with EMRCalc, but it is from the two days prior. 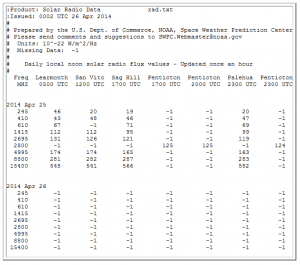 Above is from NOAA at about the same time, and it shows data from one day ago, in 6 hour it will have todays data.

So, the issue seems that EMRCalc’s source is stale, and datestamp misrepresented in its report.

If you make measurements at a certain time, you need to collect flux measurements that clearly and correctly identify the time so that you can use accurate figures.