We have had wired broadband service delivered to these premises for almost ten years, supplied by six vendors: Telstra Bigpond, iiNet, Amaysim, Southern Phone, Exetel, Sumo and then Kogan.

During this period, I have conducted routine download tests and recorded the speed. It is interesting to compare performance of the vendors.

This is an end to end file transfer test, and may depend on other organisations for part of the connection. In all cases, the server was provided by an Australian organisation, and probably located in Australia. 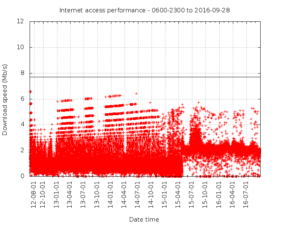 Telstra was a monopoly supplier of fixed broadband during this period of service, and it shows in the performance figures. 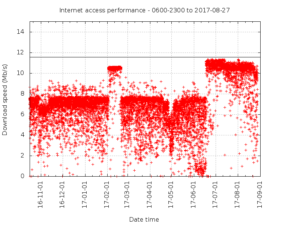 Above, iiNet never really got their act together. reports of poor speed were variously ignored, or resulted in a short term improvement which degraded within weeks.

The Amaysim service was initially 25Mb/s and upgraded by them to 50Mb/s in mid May 2018. 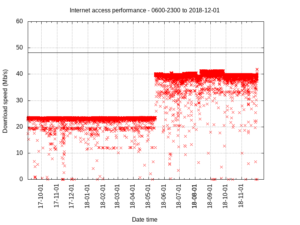 Above, Amsysim was better than any previous supplier, and although not wonderful, it was good enough to not give them the shove. Amaysim though left the business explaining to the stock exchange that they could not make money in the market.

Southern Phone acquired us as a customer from Amaysim and although they claimed everything would work as it did, it did not. The independent VOIP phone service that I had used for nearly 20 years did not work with Southern Phone, and they could not fix it.

It is pointless showing graphs as the service was dysfunctional. 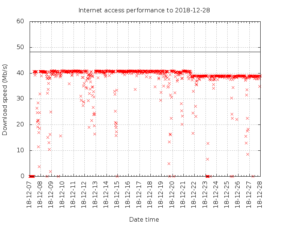 Above, service with Exetel suffered performance problems in clusters of days, performance degradation that was evident and annoying in interactive browsing.

The independent VOIP service did not work reliably with Sumo, it would work for two or three days and stop, and the only fix was a reboot of the router (although the VOIP was on a stand alone SPA122 ATA).

It is pointless showing graphs as the service was dysfunctional. 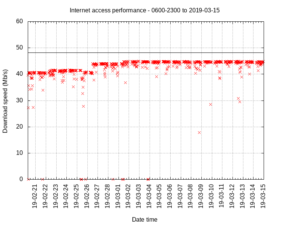 Above, Kogan’s performance in the first few weeks has been acceptable, and better than any of the other six providers that we have used.

The speed improvement on 27/2 was due to replacement of Kogan’s supplied VR500v router with a customer purchased VR600v.