A correspondent asked if it was possible to calculate the link budget for an JT65 EME path using the G/T worksheet at (Duffy 2014).

JT65 has a stated requirement of S/N referenced to 2500Hz bandwidth of better than -28dB.

The G/T ratio is a meaningful indicator of system performance, unlike quoting receiver noise temperature in isolation of sky temperature and antenna gain. The ability to receive weak signals is directly related to G/T, the higher G/T, the better. Signal/Noise ratio is proportional to G/T (Signal/Noise=S*λ2/(4*π)*G/T/(kb*B) where S is power flux density, kb is Boltzmann’s constant, and B is receiver quivalent noise bandwidth).

So, if we know S, the power flux density in W/m^2 at the receiving antenna, wavelength, and G/T, we can calculate the system S/N ratio.

The value for S can be found from the Field Strength Calculator (FSC). There is and example in FSC’s help for calculating an EME path.

In the absence of a specific scenario, let’s make some realistic assumptions:

We must first calculate a value for S for the link conditions stated. 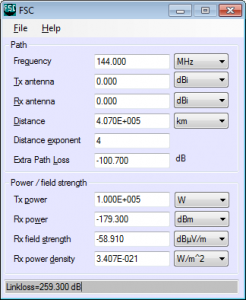 The distance used is for apogee, a conservative model. The model does not include the effects of path anomalies like polarisation rotation, libration etc.

A G/T model is constructed to find station G/T. 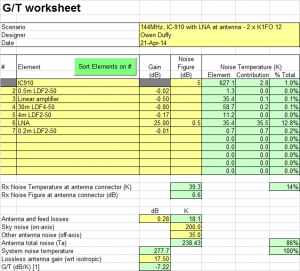 No statement is made about ground gain, you can include it in antenna gain for an optimistic model, or leave it out for a more conservative model with some reserve.

Using the formula given earlier, S/N can be calculated. The calculations as been added into the spreadsheet. 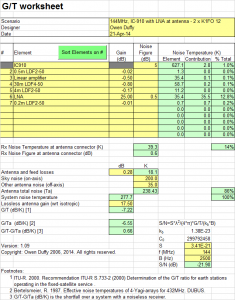 Note: do not use G/T from VE7BQH’s tables, it is not station G/T (see Trying to make sense of the VE7BQH Yagi performance tables).