This article reports the same equipment reversed so that the common mode choke is connected to the output of the MFJ-949E.

The test circuit is an MFJ-949E T match ATU followed by A low Insertion VSWR high Zcm Guanella 1:1 balun for HF.  A banana jack adapter is connected to the balun output jack, and resistors of 50Ω and 100Ω connected from those terminals to provide a slightly asymmetric load.

The voltage between ground and each of the output terminals was measured with a scope, and currents calculated. 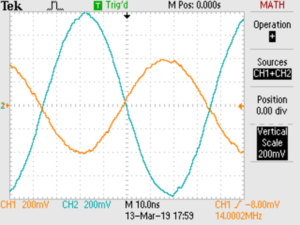 Above are the measured output voltage waveforms at 14MHz.

Expanding the timebase allows better measurement of the phase difference. 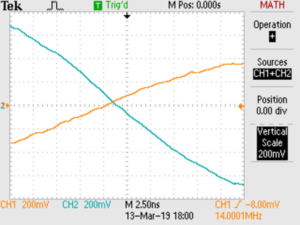 Lets calculate the common mode and differential component of current in each load resistor. We will use Python as it handles complex numbers.

Calculation of the common mode component of current involves the addition of two almost equal and almost opposite phase currents and is very sensitive to uncertainty in each of the measurements using this measurement method. This balun should achieve |2Ic/Id|>35dB in this scenario, but it would take a higher accuracy measurement system to measure it.

The measurements reported here are for the specific scenario (components, frequency and load), and should not be simply extrapolated to other scenarios.

The calculated imbalance if you like applies to the specific test circuit, and cannot really be extended to use of this balun in an antenna system scenario.