Hams are taken by fashion and pseudo technical discussion more than objective circuit analysis, experiment, and measurement. Nowhere is this more evident that the current fashion for “True Balanced Tuners”.

Cebik goes on to give examples of his “inherently balanced tuners”.

Above, Cebik’s “inherently balanced tuners” all have a common mode choke at the input, and some type of adjustable network to the output terminals.

Cebik was not the originator of the idea, many others had written of the virtue of the configuration, but I cannot recall seeing meaningful measurement to support the claims.

Lets take the last circuit, and simulate it using A low Insertion VSWR high Zcm Guanella 1:1 balun for HF followed by an MFJ-949E T match ATU. The MFJ949E stands on its insulating feet on a large conductive sheet to serve as the ground, the balun in connected to the ATU input jack and the input jack of the balun is grounded to the aluminium sheet. A banana jack adapter is connected to the ATU Coax 1 output jack, and resistors of 50Ω and 100Ω connected from those terminals to provide a slightly asymmetric load.

The voltage between ground and each of the output terminals was measured with a scope, and currents calculated. 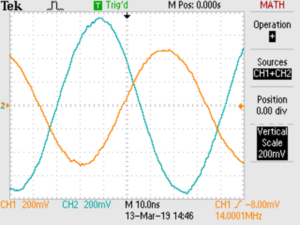 Above are the measured output voltage waveforms at 14MHz.

The meanings of currents used here is given at Differential and common mode components of current in a two wire transmission line.

Expanding the timebase allows better measurement of the phase difference. 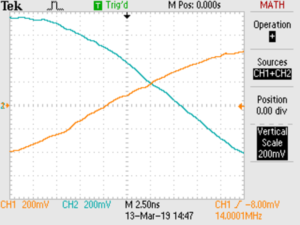 Lets calculate the common mode and differential component of current in each load resistor. We will use Python as it handles complex numbers.

By any standard, this is appalling balance.

The measurements reported here are for a specific scenario (components, frequency and load), and should not be simply extrapolated to other scenarios.

The calculated imbalance if you like applies to the specific test circuit, and cannot really be extended to use of this balun in an antenna system scenario.

The problem starts with that it is near impossible to build such an ATU with perfect symmetry, meaning the distributed inductances and capacitances to ground are symmetric so that with a symmetric load, the entire system was symmetric and there was very low common mode load current.

Achieving that symmetry does not guarantee symmetric currents in an asymmetric load. Fig 4 and the associated text at Balanced ATUs and common mode current deal with this problem.

“Inherent balance” is a belief of the very naive… and snake oil salesmen who would relieve them of their money whilst selling the satisfaction that they have something rather special!