This article expands on the detail behind A low Insertion VSWR high Zcm Guanella 1:1 balun for HF with focus on InsertionVSWR and possible compensation schemes.

A low Insertion VSWR high Zcm Guanella 1:1 balun for HF – more detail #2 discussed the imperfection caused by the quite short pigtails, and although small, it is measurable.

Chris, NX0E, related experience with Dr E M T Jones at TCI where they made, among other things, TCI’s HF baluns. These baluns were compensated using capacitors, and we see that very occasionally in ham grade baluns.

The pigtails can be seen as a short transmission line of higher Zo, and although not uniform, it provides a model for understanding their effect. 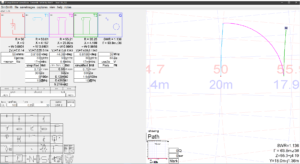 Above is a Simsmith model that treats the pigtails as short sections of 300Ω line, the lengths adjusted to calibrate the model to the observed impedance at 30MHz.

The excursion on the Smith chart shows that in each case, the section of high Zo line increases X with little effect on R, and could be viewed as an equivalent series inductance.

A possible compensation scheme may be to introduce an equivalent shunt capacitance to restore the L/C ratio of 50Ω line. 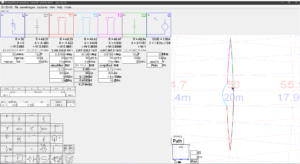 The model above uses two fixed capacitors attached to the coax connectors terminals for convenience to approximately compensate the pigtails. The model’s Insertion VSWR is extremely good, 1.004 @ 30MHz.

Note that these capacitors must withstand high voltage, and need to be low loss capacitors (eg silvered mica).

Now we should note that while this compensation is extremely good at 30Mhz, it is not so good at frequencies either side of that, and as frequency increases, Insertion VSWR soon increases more rapidly than the uncompensated balun. 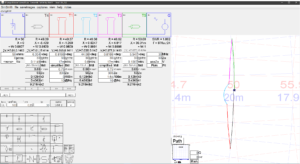 Above is a model of compensation using short open circuit stubs of RG58A/U, again attached to the coax connectors terminals for convenience. These stub sections withstand high voltage, and have a Q of around 500 at 30MHz. An alternative would be stubs of RG213 for a Q around 1500.

The advantage of coax stubs is that they are low cost, medium to good Q (when very short), can be cut to requirement. 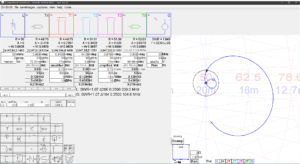 Above, sacrificing near perfect performance at 30MHz for a wider band limit, shortening the compensation stubs gives InsertionVSWR<1.07 up to 100MHz, which is a more practical result for a ham broadband balun.

Of course, this model has oversimplified the stubs as it has not captured the effects of the stub pigtails. The stubs (with pigtails) will need to be longer, and it is sensitive to the length and form of the pigtails (all of them), so in practice, one would cut the stubs longer (rather than rely on a model for dimensions), and trim them to length observing the response on a VNA. When finally adjusted, the stubs need to be reworked to prevent flashover at the cut end, and the simplest method is to remake them with the center conductor 5mm longer at the open circuit end, and some heatshrink to cover the end (see the references for an example).