Further to An interesting case study of measurement of a balun’s Insertion VSWR, this article presents similar measurements of a small DIY balun.

Above is the top view of the balun, and the test termination comprised two 100Ω 1% resistors clamped between the screw terminals, so pigtails were just 3mm in length. 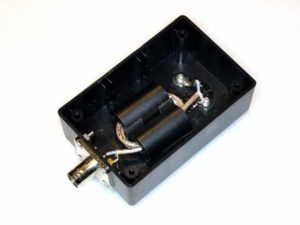 Above is a view of the interior.The coax pigtails are quite short, they exist at the input and output.

Because of the pigtails inside the box, and on the termination, there is some unavoidable lead inductance.

Measurements were made with a FA-VA5 and VNWA PC software.

A measurement of impedance looking into the balun is obtained by using port extension to subtract the effect of the known length of RG316 transmission line.

To be more correct, it de-embeds the propagation time of the additional line but it does nothing to de-embed the attenuation which is quite small for the line in this case, so the error is small. 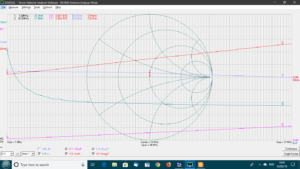 Above is the scan from 1 to 31MHz. The existence of some inductance at both ends of the transmission line complicate the results, but it appears that the port extension correction is approximately correct and Insertion VSWR reaches 1.1 at 30MHz, some of which is due to imperfection in the termination used. Nevertheless it is a good result, partly due to keeping pigtails short, partly that the screw terminals allow a short termination. Equivalent series inductance would appear to be perhaps 30nH.

Classic baluns for antenna use tend to have screw terminals that are widely spaced, often on opposite sides of the box, seemingly to suit wider spaced transmission lines. Of course when used with such lines, Insertion VSWR is not relevant, but where they are used with say, a HF Yagi, wide spacing is sub optimal.