In each case, default configuration was used, and 4s battery used for tests on a stock Hobbyking 40A ESC 4A UBEC (9261000003). Both firmwares were loaded under the SimonK bootloader.

The motors used for the test were a Hobbyking DT-750 and 4822-690Kv. Both of these motors have been mentioned in reports of sync problems with SimonK, though in my experience they have been fairly good on recent releases on other ESCs than this one.

This ESC was used for tests as it is listed as compatible with BLHeli, though it is mistakenly described as an F-40 in that list, the picture is clearly of the 9261000003.

Both motors on SimonK had a strong tendency to chug if throttle was raised quickly. This behaviour has not been observed on several other ESCs using SimonK, but it is very evident on the 9261000003 and makes the drive system totally unusable. 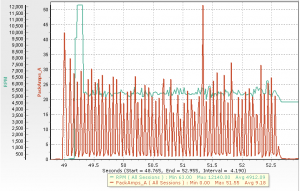 Above is a capture of the DT750 motor chugging, through all the time the current is pulsating, the throttle is stead at about 75%. The motor attempts to accelerate then it appears it loses power and restarts cyclically about 20 times per second. 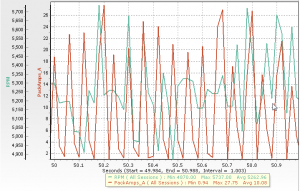 Above is a zoomed in view of the previous figure. It appears that drive is being cut off before the motor has time to accelerate, possibly caused by loss of sync. 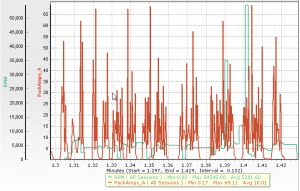 Above, somewhat similar behaviour on the 4822-690Kv motor. Again the drive system was totally unusable. 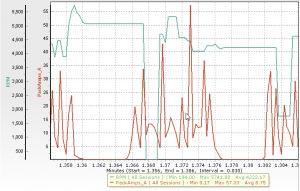 Above, a zoomed view of the previous figure. 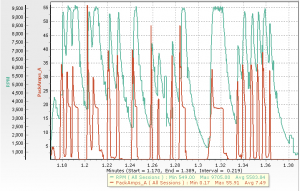 Above is a capture of the same system with BLHeli installed, and rapid throttle changes from min to max. All of these current variations are a direct response to throttle changes, there is no tendency to chug or any signs of sync problems. 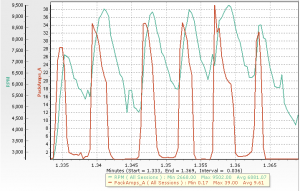 Above is a zoomed in view of the previous figure. It can be seen that the motor accelerates from about 50% to 100% rpm in a little over 100ms and current doesn’t show any sign of erratic spikes, the ESC just drives high current until the motor speed reaches near max at which point the current naturally decreases. This is a well-behaved drive system.