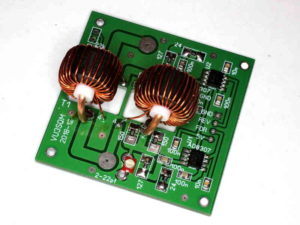 For reasons discussed in an earlier article, the transformers use a larger core than the original VU3SQM. They need to stand above the board, and whilst that compromises the mechanical strength of the assembly, it should have better performance.

Some 5mm PTFE rod was drilled 2mm and annealed single core copper inserted. The whole thing is pushed into the core aperture, holding the other winding in place and supporting the core on the single turn which is soldered to the PCB lands. Were I to design such a board from scratch, I would use a better method of securing the larger transformers.