The NEC model reveals that the loop reactance is 121Ω. 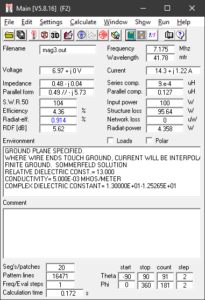 Above is a result screen from the NEC model showing some key quantities that can be used to dissect the feed point resistance into important components. Radiation Efficiency given here as 0.914% can be expressed as -20.4dB. 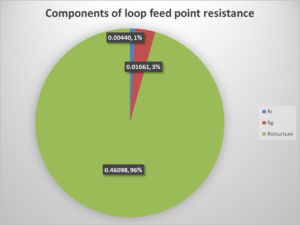 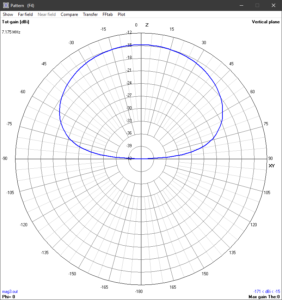 Above is the radiation pattern. As expected for an STL near ground, the maximum gain is towards the zenith and in this case it is -14.8dB. The Directivity show in an earlier screenshot (as RDF) is 5.62dB. 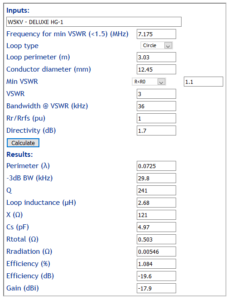 Note that the perimeter is 0.0725λ, within the stated accurate range of the underlying free space model.

More importantly, NEC’s calculation of Rr of the loop in the presence of ground being 0.0048Ω is significantly less than predicted by traditional formulas. 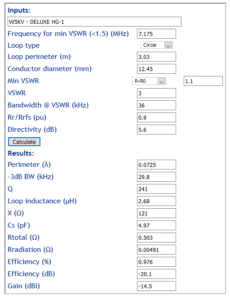 Adjusting Rr to the model (Rr/Rrfs=0.9), and Directivity to the model (5.6dB) we obtain an efficiency of -20.1dB and gain of -14.5dB which are both within tenths of a dB of the NEC model results.

The model applies to the scenarios described, and extension to other scenarios may not be valid.

NEC-4.2 is a more complete model of the scenario and when calibrated to the measured half power bandwidth, it probably our best analytical estimator of radiation efficiency.