Above, the first measurement shows both channels, and the currents appear almost equal in magnitude and almost opposite in phase, but it does appear that there is a slight phase difference, perhaps 5-15° from exactly opposite phase. Each channel is almost 2div peak to peak, and let’s assume the calibration factor is 1A/div.

At this point, it would be easy to consider that the currents are equal but opposite.

Let us explore the limit scenarios of 5 and 15° phase difference.

i2 is converted from polar form (where the phase is calculated in radians) to rectangular form, the ‘normal’ form for complex numbers in Python.

i2 is converted from polar form (where the phase is calculated in radians) to rectangular form, the ‘normal’ form for complex numbers in Python.

Under this scenario, the value of ic is very sensitive to the phase difference and it is quite difficult to read it with great accuracy. You could use calibrated cursors in a modern DSO to improve the accuracy, but it is fiddly.

Calculated Ic is also very sensitive to the magnitudes of i1 and i2.

All in all, this is not a very good measurement setup for the scenario at hand.

Exploiting the facility in most modern scopes to add or subtract two channels, the following second measurement is of the difference of the channels.

There is some unexpected offset there, but importantly the magnitude of the RF component is about 0.3div peak to peak.

We could go on and solve for Ic and Id (common mode and differential components) given i1, i2 and i1-i2 using the law of cosines, again using Python.

For convenience, there is also a handy online calculator which solves the problem using the law of cosines. 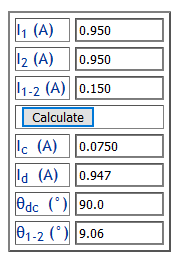 Above are the results, ic is 0.075A. The other results remain quite sensitive to measurement of i1 and i2, but since the desired quantity is ic and we have measured it fairly directly, confidence in the value obtained is good.

One clip on current probe

The use of a single current probe eliminates some uncertainty in the measurements.

The astute reader will have realised that a scope is not needed for this measurement, terminating the current probe transformer in a resistance and measuring the voltage with a simple detector can provide the needed data. Such an instrument is described at Measuring common mode current.

The design of a suitable current transformer is discussed at:

Whilst it might be held that an oscilloscope is the universal measurement tool, that it can do anything, it is doubtful that it is very suited to measurement of feed line common mode current, and a much simpler instrument designed as a clip on RF current meter is much more convenient, and direct reading.