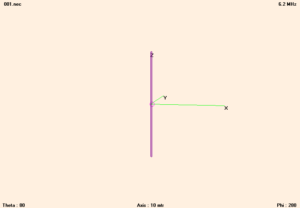 Above is the serpentine structure of three quarter wavelength folded, and below it, a reflection of itself. The whole structure is fed in the middle and the impedance vs frequency charted. 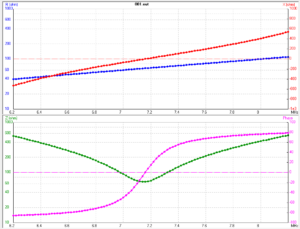 Above, the impedance vs freq, both in cartesian and polar form are plotted and show a clear self resonance around 7.15MHz.

Three quarter wavelength a side straight

For comparison, a plain dipole of the same total wire length is modelled. 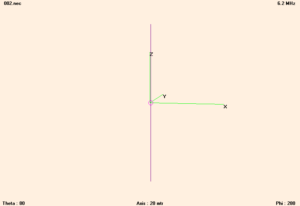 Above, the plain dipole of same total wire length. 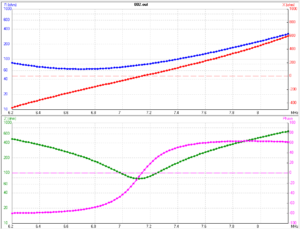 Above, the impedance vs freq, both in cartesian and polar form are plotted and show a clear self resonance around 7.15MHz.

There is a little difference in the resistance plots as might be expected because it is mainly radiation resistance which is affected by the folding of the conductor. The reactance plots are very similar, and importantly, the resonant frequencies are almost equal.

To all intents and purposes, they are both radiating transmission lines of 3λ/4.

So there should be little surprise when the 3λ/4 “cable balun” is extended by a further λ/4 to make a total of λ and connected to ground, that a low impedance to common mode current is presented at the feed point. 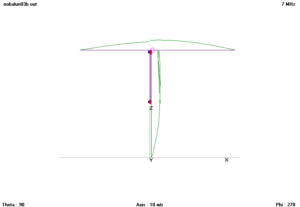 Above is the current distribution diagram from the model, the dark green curve is the magnitude of current. Note the common mode current on the vertical feed line, its magnitude relative to that on the dipole elements is relevant.

It does exactly what is predicted from a very simple analysis. If you follow the thinking, you can see that it is quite naive to think the “cable balun” alone effectively reduces common mode current in general.