K0KA made a quite polished presentation published as a Youtube video explaining how to measure balance performance of an antenna system and an ATU.

He did not define what he means by balance… but it will become apparent.

Midway through his video, he measures the ‘balance’ of a Palstar AT5K (though possibly modified) by connecting a symmetric load consisting of two 470Ω 2% resistors in series and connecting the junction to the ground terminal on the ATU. 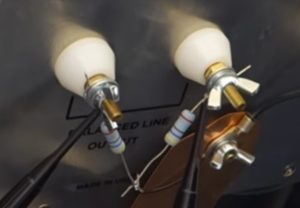 Above, from KA0KA’s video, his test load. The oscilloscope probes can be seen.

The oscilloscope channel gains are carefully adjusted to be equal.

Above, the first measurement shows both channels, and the voltages appear almost equal in magnitude and almost opposite in phase, but it does appear that there is a slight phase difference, perhaps 10° from ideal. Each channel is approximately 2div peak to peak. Since we cannot be sure of the calibration, we will work in divisions as a relative measure.

The second measurement is of the difference of the channels.

There is some unexpected offset there, but importantly the magnitude of the RF component is about 0.3div peak to peak.

Now lots of hams would content that if the magnitudes of I1 and I2 are equal, then we have current balance. Some even install two current meters in their ‘ultimate ATUs’ to show such a condition.

But, remember the phase difference. Small as it is, it is not zero and therefore, even if the magnitudes of the currents are equal, there is common mode current. 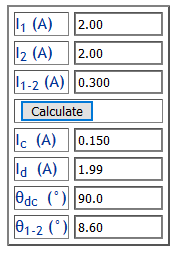 So, the test demonstrates fairly mediocre common mode reduction though on a load that is symmetric and fairly high Z. Symmetric loads tend to assist low common mode current, and high Z loads tend to work against it.

I might add that the AT-5K is a tuner that has a 1:1 Guanella balun on the Tx port, feeding a T network which then connects to the balanced output terminals in this case. The more ideal that balun, the closer the currents on its output side are balanced. Lack of ideal physical symmetry of the T network degrades that current balance, so it is little surprise that the currents in a symmetric load (as in this case) are not very well balanced. The measurement highlights the failure of thinking in this type of design configuration (Balanced ATUs and common mode current).

More relevant would be direct measurement of I1, I2 and I1-I2 on some real antenna scenarios which differently to the test above, are less likely to be symmetric, and more likely to have common mode current driven by coupling from the nominal radiator.

Voltage balance is commonly of less interest than current balance, as it is current imbalance that leads to the feed line participating as a radiating or pickup element of the antenna system, possibly exacerbating EMC problems and assisting noise pickup from local sources.

Common mode current on HF antenna feed lines can be measured directly with very simple equipment. Sure there is commercial equipment available, and much of it is ill-conceived, though some devices appear soundly based. I have not tested or evaluated any commercial devices, though I have done a paper evaluation of some patently flawed designs (DIY and commercial).

Note that whilst I have been able to calculate for this example, the phase relationship between the currents in the two load resistors and the common mode and differential mode components of those currents (in relative terms), that cannot be done for the example in the first half of the video as we have no idea of the ATU load impedance, an equivalent circuit if you like for the antenna system. In the real world, a two wire feed line with antenna isn’t simply a two terminal load, there is a third terminal, the ground. A more general representation of the ATU load is a three terminal network which may be asymmetric, and which can be simplified to an equivalent star or delta network.