The coupler uses a type of Sontheimer coupler (Sontheimer 1966) and these are commonly poorly designed. The first question is whether the magnetising impedance of T2 which appears in shunt with the load is sufficiently high to not give rise to poor insertion VSWR.

The instructions specify a FT50-43 with 10t for 1MHz and up. Experience says this is probably low turns and worth reviewing.

Though rated down to 1MHz, this review is at 1.8MHz, the lowest ham band above 1MHz. (It has worse InsertionVSWR at 1MHz.) 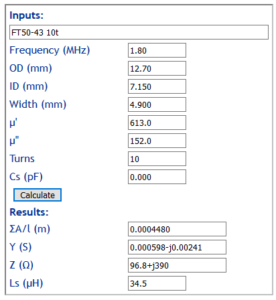 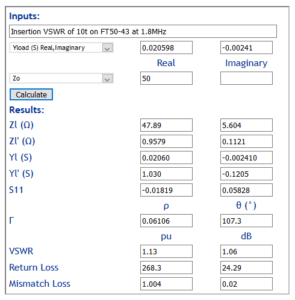 Ok, 10t gives rise to an InsertionVSWR of 1.13 at 1.8MHz considering the core alone, which is on the poor side.

It is worth reviewing the expected dissipation of the T2 core as this is a failing of many designs.

The performance may be better with a core with double the ΣA/l (or double Al).

The 30dB coupler can be analysed using the same method. It is left as an interesting exercise for the reader.