Download speed is an important performance characteristic, and fairly quantifying it is a challenge.

If I were to express my service expectation as “I want it to deliver most of the rated speed, most of the time during the hours that I want to use it” we can express that by better defining the three terms:

Most of the rated speed

Most of the time

Let’s consider that most means 80%, so the critical value is 80% of the time.

During the hours that I want to use it

I sleep at nights, and use the Internet variously during the day, the most important times for service to be adequate are from 06:00 to 20:00.

This is known as a Service Level specification.

Statistically, this is stated as the 20 percentile speed measured between 06:00 and 22:00 over a week must be greater than 80% of the rated speed.

A realistic simple HTTP download is scheduled every half hour, and the effective download speed is recorded. This data has been gathered for many years. 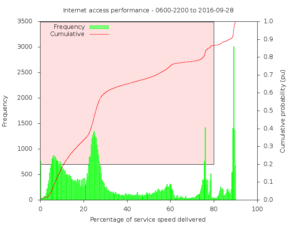 Above is a plot of the measured speed over a period of many years.

The green bars are a frequency histogram of the distribution of measured speed, and it can be seen that it was most commonly well below 30% of the rated speed.

The red line is a cumulative frequency plot of the same data, and shows the percentage of time where speed was less than that a given normalised speed. So, for example 25% of the rated speed was exceeded 50% of the time.

So, Telstra is a pretty big fail but when you are a monopoly provider and consumer protection is dismantled to make way for a government owned monopoly provider, consumers will be treated poorly. Needless to say, with this history, Telstra and its associates are out of consideration for future service.

At first opportunity to choose an alternative supplier once NBN was available, a service was taken with iiNet. 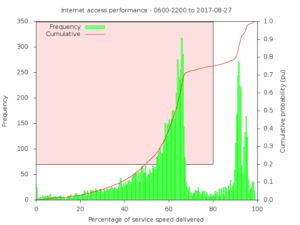 Well, iiNet was better than Telstra, but not much better.

As a result of the underwhelming performance of iiNet, I churned to Amaysim. 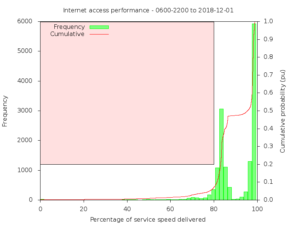 Now that is quite an improvement.

Unfortunately Amaysim sold its customer base to Southern Phone stating that it could not make money in the market. Southern Phone assured customers that everything would work like it had… but it didn’t, and so the period of service was very short, less than a week. A fail for Southern Phone on functionality and ability to fix the deficiency. (Port blocking is often done to captivate the market for certain services, eg VOIP.) 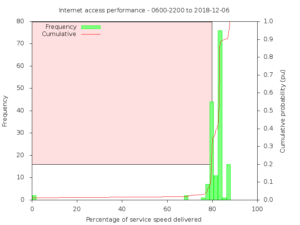 Above, in just five days,

My long held independent VOIP service did not work properly and Southern Phone could not fix it, all they could do was restate their position so yet another churn.

Exetel had several provisioning issues, and it is working after a significant disruption to service. Let’s visit its performance in a month (unless something goes pear shaped before then).

Why is it that providers don’t deliver most of what the customer pays for most of the time?

The only supplier to make the grade was Amaysim, and they left the industry citing the difficulty in achieving profit.

There are probably several factors, but uppermost will be that government does not want strong consumer protection because they own the monopoly fixed broadband enterprise and have a mind to sell it at a profit (don’t laugh).

If you are not systematically measuring the performance of your broadband service, do you know whether you are getting what you are paying for.