The analyser is a low cost kit (~A$265 including high accuracy cal kit and postage), the SM components are already fitted to the PCB, but the other components like switches, display connector etc need to be fitted. Whilst these parts are hand soldered, some pins are quite close to other components and require a fine soldering tip and steady hand. It is probably an hour’s work to complete the assembly. 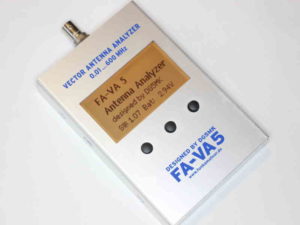 Above is the completed FA-VA5. As can be seen, it has just three buttons which are used to navigate a menu system and to perform data entry, both of which can be a bit tedious but that is the trade off for a simple user interface.

This article is not a wide ranging review, it is a first test on a component that it relevant to the HF ham experience, and is challenging for most analysers in common use.

A first exercise to evaluate the FA-VA5 was to measure a small test inductor, this simulates application to measure the choking impedance of a common mode choke. 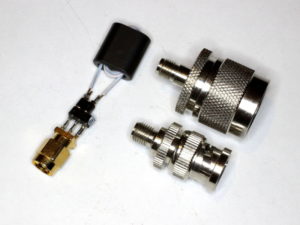 To complement the fixture is a set of calibration components (though they were not used for this set of tests). 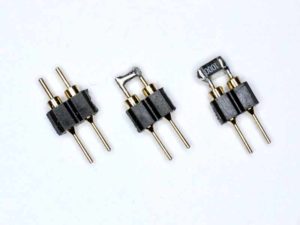 Above are the OPEN, SHORT and LOAD components, the load is two 100Ω 1% SMD resistors in parallel. The reference plane is a point about 1mm below the top of the pins. If one was obsessive, 1mm should be trimmed from the OPEN… but the effect will be very hard to measure at these frequencies.

The FA-VA5 was constructed and then a full SOL calibration done with the SDR-Kits high accuracy BNC calibration set. The FA-VA5 is capable of SOL calibration at the fixture pins with appropriate test components, but this was not done for this test as it does not greatly improve accuracy.

The inductor was measured on the FA-VA5 stand alone and the data saved to memory on the FA-VA5. The FA-VA5 was then connected to the PC and the measurement data imported to DG8SAQ VNA Software and displayed with appropriate scale factors. 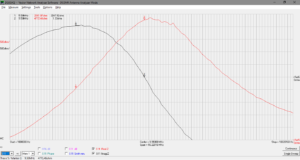 Above is a screenshot of the display.

The AA-600 measurements rely on the factory calibration. The AA-600 is capable of SOL calibration at the fixture pins with appropriate test components, but this was not done for this test as it does not greatly improve accuracy.

The inductor was measured on the AA-600 stand alone and the data saved to memory on the AA-600. The AA-600 was then connected to the PC and the measurement data imported to Antscope2 Software and displayed. 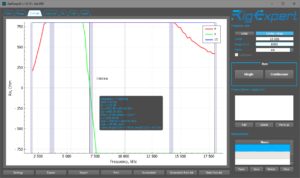 Above is a screenshot of the display.

It does not seem possible to increase the range of the Y axis, so the display is pretty useless for this application. If I wanted to present a graph of this data in a blog article, I would need to export it and build a graph in Excel or the like.

The FA-VA5 + DG8SAQ VNA Software combination acquitted itself quite well on this test, and superior to the Rigexpert Antscope2 display.