This article documents the rework of an inexpensive Chinese IR Reflow Oven for PCB assembly. 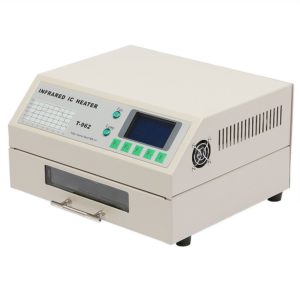 The product is widely sold and quite modest price, but is properly criticised for a number for problems that are easily fixed in the hands of a competent person.

As with everything coming out of China with a mains power cord, this device warranted an electrical safety check. Right up front it failed the earthing test of AS/NZS 3760. The cause was a grounding lug not making contact with the painted steel panel, addition of an internal tooth lock washer provided the necessary contact.

Be aware when working on this that there is not an earthing conductor to the top panel, it receives its earth when fixed in place but if removed for service it presents a potential hazard.

Much has been written about mediocre performance of the oven. 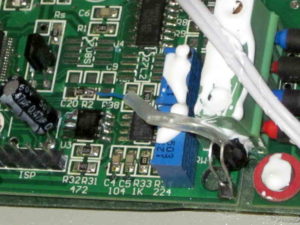 Above, the DS18B20 TO-92 temperature sensor attached to the thermocouple terminal block with heat conductive adhesive, and wired to a GPIO pad with strong pull up resistor to power the sensor.

Another problem widely reported is acrid smoke from some tape used to secure the insulation on top of the oven chamber. The tape appears paper based and is widely described as ordinary masking tape… though it probably is not. Nevertheless, it burns under normal operating temperatures and was replaced before use with Kapton tap on the board under the front of the insulation, along the left and right sides and front of the top insulation cover. 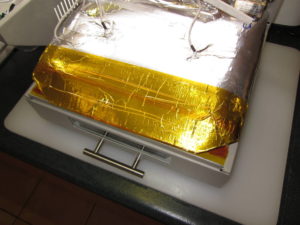 There are replacement controller boards available priced at more than the oven cost. The supplied controller has a NXP LPC2134 ARM7 chip, quite capable and replacement firmware seems a potentially better approach.

Open source firmware that addresses the problems apparent in the factory firmware was developed by a hacker and is available at UnifiedEngineering/T-962-improvements .

The firmware is easy to load, a 3.3V FTDI board with access to DTR and RTS was quite sufficient to use the automatic features of Flash Magic. 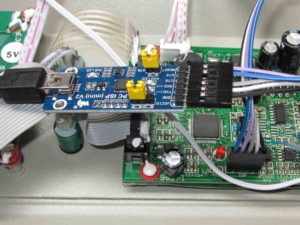 The adapter above fully integrates with the ISP interface of the LPC processor, note the jumper set for 3.3V.

The thermocouple input  circuit uses a TLC27L2CD low offset high impedance single rail op amp. It is designed to operate at input voltage as low as -300mV which is way below the temperature expected of the thermocouple loop (-6mV @ -200°), so it is difficult to understand the need for the split supply modification proposed by some. (Of course the output voltage of the op amp cannot go below 0V, so able to measure temperatures lower than equivalent to the op amp’s input offset voltage, but this should not be an issue.)

The op amp is low offset, but low offset means 50% within 1mV which is equivalent to 15° so for accuracy, offset compensation is needed and although it is not in the hardware, the new firmware has the facility. 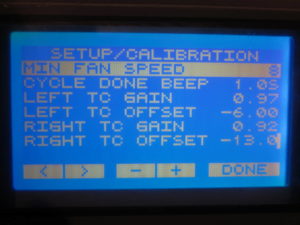 The hardware has no offset adjustment and a gain adjustment in each channel. The calibration above shows just what they had done, adjust the gain to calibrate the sensors at 200° or so.The new firmware provides better agreement between the two thermocouples at lower temperatures, better oven temperature control. 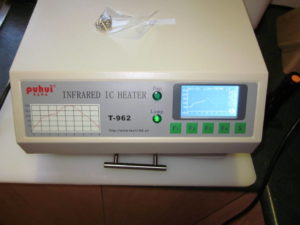 With the electrical defect rectified, new firmware, calibration of the thermocouple channels, the oven was run at 200° for 10min to expose any potential for overheating. No problems were found.