This article is a discussion about the Motorola TAD1000B Folded Coaxial Antenna series.

Above is an image from Moto’s documentation, it shows what appears to be a simple coaxial or sleeve dipole, bit with the top quarter wave element folded like half of a folded dipole.

(Note that coaxial dipole means something different to hams who are inclined to appropriate well known industry terms and use them for their own purposes, coaxial dipole is often used to refer to the W5GI Mystery Antenna.)

The antennas were available for VHF High Band (136-174MHz) in sub models of about 10MHz bandwidth.

Online discussion reveals that this antenna has presented somewhat an analysis challenge. It isn’t as simple as an ordinary coaxial dipole, but it is a combination of just a few key elements that present a variation on the theme.

Above is an exploded view of the antenna, and reference will be made to some elements in the discussion.

The first variation on the ordinary coaxial dipole is the folded top quarter wave section. This structure supplies two important elements, a close to quarter wave s/c stub in shunt with the dipole feed point (9), and by virtue of the equal diameters of the up and return conductors, approximately 4:1 step up of the basic dipole feed point impedance.

So we would expect that in free space, at (9) we would observe a resonance at close to the frequency where the sleeve + top section is a half wave long, and that the feed point impedance at that point would be close to four times that of a dipole in free space or 4*70=280Ω. 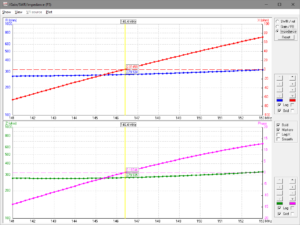 Above is an NEC model of a similar structure to illustrate the expected Z at (9). 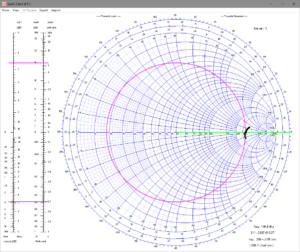 Above, the same in Smith chart form.

The upper TL section comprises the main centre conductor and the support tube (16).

The lower of these TL sections comprises the main centre conductor, the support tube (16) and a ‘floating’ sleeve (14). The effect of this sleeve is to reduce Zo of this TL section below that of the upper TL section.

The dimensions of these TL sections is chosen to transform the feed point Z at (9) to 50+j0Ω at the bottom coax socket .

The following sets out a starting point for an implementation for 147MHz.

Whilst the feed point impedance of the dipole at resonance in free space might be 280Ω, decoupling of real world support structures is not perfect, and Z may vary a little.

TL1 needs Zo of somewhere around 130Ω to achieve the match. It is not as critical as a single quarter wave match since TL2 is available for further transformation.

Such a high Zo demands a near air spaced line, supporting insulation must be kept to a bare minimum.

If the support tube was say 38mm OD, and 3mm wall thickness (for wind strength), then ID is 32mm. A 3mm inner conductor gives Zo of approximately 140Ω.

TL2 shares the same inner and outer conductor, but the sleeve reduces Zo. A simple analysis is to consider it to be two TL in series at the input and output where the composite Zo is the sum of the two components.

Zo of the combination is 100Ω. 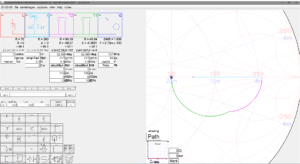 The Simsmith chart above captures the transformation scheme from a nominal 70Ω half wave dipole to 50Ω at the coax jack at the lower end of the support tube.