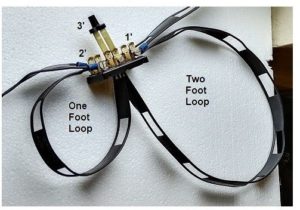 The accompanying explanations states that this “is a way to use a single DPDT knife switch to obtain one, two, or three feet of ladder-line depending on the position of the switch”.

It is certainly a simple explanation, but incomplete. The error may be small and insignificant in this scenario, but you come to understand whether it is or not significant by solving the scenario.

The effect depends on the impedance (ie V/I) at that point in the through line, the length and characteristic impedance of the loop, and the frequency. 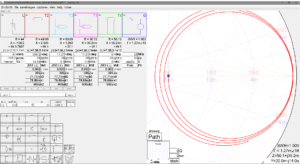 The effect of the two open circuit stub equivalent of the ‘shorted loop’ is shown by the green and magenta segments.

Now lets move the match device to half way along the main line, if it truly simply extends the main line by 1′, it should make no difference moving an extension from one end to the middle of the line. 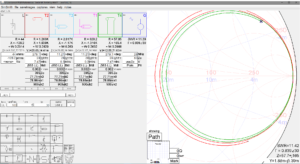 The input VSWR is now more than 10.

Conclusion: the match device does not simply change the line length by 1 or 2 feet, the shorted sections act as stub elements in shunt with the main line, and their effect depends on the impedance (ie V/I) at that point in the through line, the length and characteristic impedance of the loop, and the frequency.