At Rigexpert’s Antscope takes a step backwards I wrote of Rigexpert’s determination to cripple Antscope by reducing the maximum value of R and X on graph axes to +/- 1600Ω.

I have deferred trying the new Antscope2 until now to allow it to reach some maturity.

This article is a brief review of Antscope2 v1.0.10, brevity driven by the need to cut losses and run. 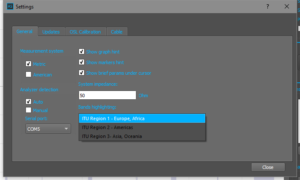 The first thing I noted is the difficulty in reading some textual data due to low contrast. The mid blue on mid grey above is very hard to read and would be even harder outdoors if measurements were being made in that environment. I did not search for alternative themes, none jumped out, but out of the box, this is very limiting. FAIL.

First up I tried to ‘open’ an archived Antscope file… but Antscope2 does not offer backwards compatibility. If you have saved .antscope files for historical, documentation etc reasons, you cannot open them directly to view in Antscope 2. FAIL.

Don’t underestimate the value of saved measurements, especially where they cannot conveniently be repeated, or for instance are required as a baseline in a now and then measurement (Baselining an antenna system with an analyser). So, don’t uninstall Antscope, you are going to need it to access archived measurements.

I did open a .s1p file that I had saved with Antscope, it was a measurement of the common mode impedance of a choke balun. 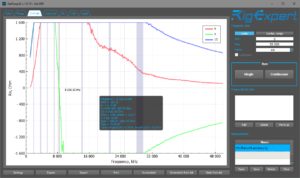 Above is the archived .s1p file with R, X scales set to maximum. As you can see, in the area of interest (1-15MHz), the traces are off scale (though you can see spot measurement reported in the cursor information area, even if hard to read due to low contrast). FAIL. 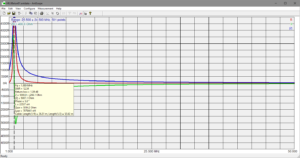 Above is the original plot from Antscope v4.2.57.

Since I use a back level version of Antscope to obtain more useful graphs, on the basis of the initial tests of Anstscope2 v1.0.10 I will not waste further time on it.

In my experience, the software is a really important part of exploiting the AA-600 and if Antscope2 is Rig Expert’s direction, then another analyser is the answer.