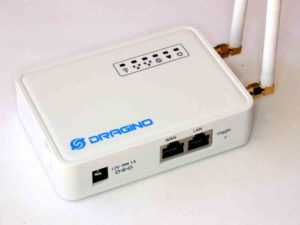 Above is a pic of the supplied device, and notably it is supplied without the external WiFi antenna shown in the manufacturer’s literature and seller’s web shop. 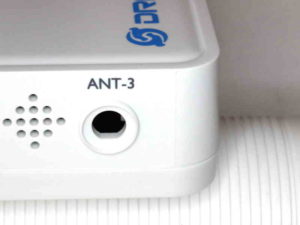 Above is a close up of the case with the plastic plug removed from the ANT-3 hole, there is not connector, the device does not have provision to install the external WiFi antenna and presumably has an internal antenna though we might expect that has reduced range.

Connecting it up to the network and logging on to the shell prompt, it uses obvious that it is a half baked DHCP implementation where it acquires an IP address, but does not implement the DNS environment specified in the DHCP response. It cannot see local hosts by IP name, and one must use IP addresses to refer to them.

This is very misleading, the LoRaWAN standard does not support a single frequency mode, but Dragino propose a way of bodging a sensor driver so that it forces use of a single frequency, though it appears that they have not worked out how to do that in OTAA mode. The long and the short of it is that you might get this to work in ABP join mode, and in so doing you lose much of portability of the device and resilience to use other channels and (true) LoRaWan nodes.

To call it a gateway is to compare its function with that of a LoRaWAN gateway, it falls way short of the standard.

The manual describes several modes, and one that is of interest is the MQTT mode where the packets received on the LoRa link are formatted into an MQTT request (topic and data) and submitted to a nominated MQTT server.

Attempting to configure this using the luci based web configuration screens went ok until trying to add the ‘channel’ definitions to derive the MQTT format data from the LoRa packet. 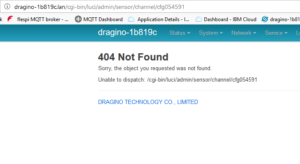 Selecting the Add button to create the channel definitions leads to a missing page, the configuration tool is broken.

Despite spending about 20 hours fiddling with other modes to see if I could find hint of configuration files created for the lg02_pkt_fwd daemon, I was unsuccessful.

Asking Dragino support for instructions to bypass the defective web configuration interface and create configuration files from the shell prompt, I was advised

Things got off to a bad start buying from The IOT Store product described as “Australian stock” and paying express post to find it was not sent for nearly two weeks… a lot like the Chinese cheats on eBay who falsely claim goods are located in Australia.

When the seller was contacted about the MQTT failure, he insisted they have sold hundreds of these things and not had problems. His later concession that this was a very new product seemed inconsistent with the claimed volume sold.

Dragino support was contacted and they advised on 29/9  This is a known bug for us and we are working in fixing it. I expect to have this fix at about 10th October because some low level code need to be changed and we are in holiday in 1st ~ 7th, Oct. It is now 17/10 and no further info received from Dragino.

Eventually a partial refund was received on 16/10.

The device supplied lacked the WiFi antenna shown in product descriptions, claims that the LG02 is a LoRaWAN gateway are a fraud, and the MQTT forwarder mode did not work, a defect accepted by the manufacturer and not yet fixed.

The issues speak volumes for the manufacturer and seller.

Still having an interest in exploring a simple single channel LoRa wireless connection of clients, a possible solution based on: 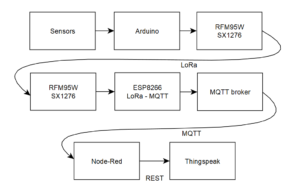 This solution does not bring the advantages, or the costs of a LoRaWAN implementation. The client cost would run to $30, and the LoRa-MQTT adapter would cost around $30.