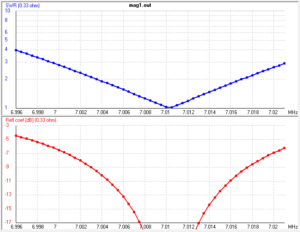 The NEC model reveals that the loop reactance is 124Ω. 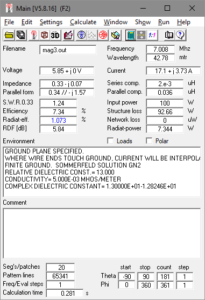 Above is a result screen from the NEC model showing some key quantities that can be used to dissect the feed point resistance into important components. Radiation Efficiency given here as 1.073% can be expressed as -19.69dB. 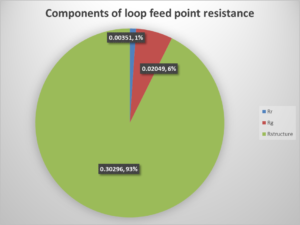 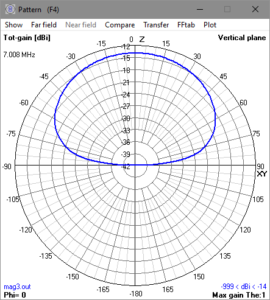 Above is the radiation pattern. As expected for an STL near ground, the maximum gain is at the zenith and in this case it is -14dB. The Directivity show in an earlier screenshot (as RDF) is 5.84dB.

The key experimental result was radiation efficiency of -15.77dB (2.65%) which is almost 4dB better than the model results.

There may be two main contributions to this, the use of term 2*Rrad in the efficiency calculation, and the value of radiation resistance Rr (Rrad) may not account for the effect of ground reflection on Rr.

(Findling, A & Siwiak 2012) mention “ideal loaded Q” in calculating Qrad which hints that they may be disciples of (Hart 1986) . They calculated Qtotal from the loop antenna alone, and for their given efficiency calculation, Qrad should be calculated for exactly the same scenario but with all of the dissipative losses extracted. Qrad should be of the order of 28,447 for their antenna, and their efficiency on that basis should be 10*log(376.29/28447)=-18.79dB (1.32%). 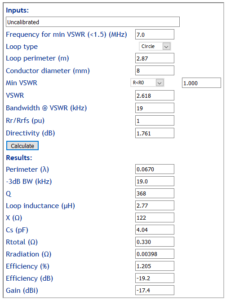 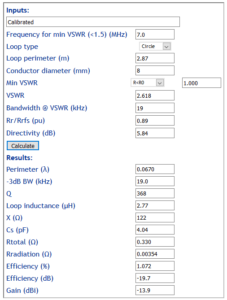 The model applies to the scenarios described, and extension to other scenarios may not be valid. Note that different models of Alexloop may have significantly different behavior.

The radiation efficiency calculated by (Findling, A & Siwiak 2012) of their test antenna does not reconcile well with an NEC-4.2 model and appears to be optimistic, possibly due to a flawed concept of Qrad.