VE7BQH publishes a table of Yagi performance data derived from a number of modelling programmes. The table is often used as a definitive reference of the overall merit of an antenna by buyers, makers and students for their own situation.

This article is mainly motivated at better understanding the G/T column of the tables.

The usual practice is to calculate G/T with reference to a well demarcated point such as the antenna flange or coaxial connector. The choice of reference plane is not critically important so long as the losses etc on each side of the reference plane are properly accounted.

It assists validation if the reference plane exists as a physically accessible point at which measurements may be made.

The use of dBd by VE7BQH is a very ham method of referring to antenna gain, there is a common ham ‘belief’ that it is a more valid expression of gain, but the use of the factor 2.15 highlights the fact that dBd it is not a fundamental unit of gain.

It appears that VE7BQH’s 144MHz G/T figure is calculated from other columns as:

There are a few outliers which may be errors, but almost all rows reconcile with this expression.

It is clear that the reference plane is not simply a single connector that feeds all Yagis of an array given the statement no stacking harness losses or H frame effects are included in the 4 bay gain figures.

This artificially represents the four bay antennas as having around 6dB of gain over the single Yagi, but the construction limits the minimum transmission line loss before a single LNA and a more honest impression is given by including the minimum feed losses to a single point feed.

It is stated that Ta includes Tloss which is the internal resistance of the antenna in degrees Kelvin, but given the statement regarding harness losses, it appears that Tloss does not include the feed system, but perhaps structure losses alone.

It is not clear whether the figure Ga includes the effect of structure loss, it should do to be consistent, and as mentioned, it should include the loss in a practical minmal feed system to a single connector interface.

The G/T expression does not include the receiver system equivalent noise temperature referred to the ‘virtual’ reference plane and so it clearly does not comply with ITU_R meaning of G/T where T is the system noise temperature, and so it overestimates G/T. 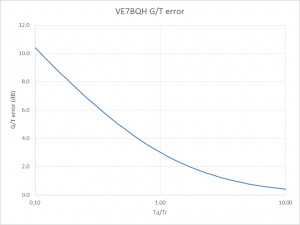 It can be seen that when Ta >> Tr, the error is small, but for other scenarios (as is likely on UHF and above) the error is significant.

Note that the ranking on VE7BQH’s statistic does not imply a ranking of G/T that properly includes receiver noise, and the change of rank depends on Ta/Tr. So if the table indicates one antenna is better than another, it might not be when receiver noise if factored in. 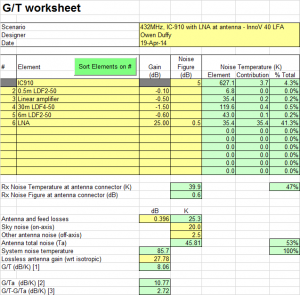 Above is a model of a complete example station. It includes in “Antenna and feed losses” structure loss and the loss of a minimal feed system of LMR400 and combiner to provide a single connector interface to the antenna. In this case, the G/T is almost 5dB lower than in VH7BQH’s table.

(Edwards 2013) labels a column G/T and it does not use the standard industry meaning of that term.

The error may be significant except where Tr<<Ta.