A correspondent sent me a set of measurements he made of an air cored solenoid using a Q meter.

L and Q were estimated and measured with three different tapping points at one end of the coil.

Whilst the method described in the reference article does not attempt to estimate the effect of tapping where the unused turns are left open circuit, we might expect than when the unused section is a small part of the coil, that the effect is similar to that if the unused turns were not there.

A model as described in the reference article was constructed. 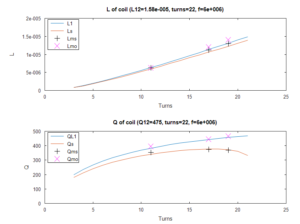 Above, the model results There is quite good reconciliation with the predicted behaviour.

Self resonance effects of L2

We cannot say that if L2 is large enough to approach self resonance. Under those conditions significant current may flow within L2 and consume power from the field, so reducing Q.

To short or to not short?

The model and experiments show that shorting just a few unused turns may significantly reduce Q whereas shorting a larger unused section has little effect on Q.

A combination approach may give optimal performance, leave small unused sections open, but short larger unused sections. This is done in some proprietary ATUs, though the switch mechanisms have their own issues in practice.

Another method with switched coils is to arrange the coil in sections so that coupling into shorted sections is minimised. Again this is employed in some proprietary designs.

The problem in ham applications is greater for ATUs where just a small number of turns is shorted under some conditions (eg use on the lowest bands) whereas for valve PA PI couplers, it is less common that a design short just a couple of turns.

Notwithstanding this poor fit to application, the inductor of choice for the ham ATU market is a roller inductor, and this is one of the factors that contributes to their high loss on the lowest bands.