The table above from the chapter Component Data and References states that a 0.5″ core has AL=523 as used in the example above. (The units they use are clumsy, AL should be specified with units, and nH for a 1t winding is very common and equivalent to the values in the table above, I will use nH here.)

The table above gives fuller dimensions of that core.

Lets consult Fair-rite’s data for the core, they are the leading manufacturer of #43 cores and their data has more information which we will come to need.

Above, Fair-rite’s curves for #43 material which was used for the example. Permeability is not a simple scalar quantity, it is a complex quantity (ie having real and imaginary parts) and it is frequency dependent.

Examining the chart above, readers will note that the real part (µ’) is approximately constant below about 700kHz, and the imaginary part (µ”) is relatively small at those frequencies and might be ignored, so calculations based on permeability being 800 will only be reasonably accurate below about 700kHz in this case. Since AL is based on the permeability at 10kHz (which is 800), the same applies.

For avoidance of confusion, let’s abandon the ARRL’s 60t example, and use the same core (though using  AL=440nH) design an inductor with least number of turns that gives Xl>50Ω at 3.6MHz. (We can only put whole turns on a toroid.) 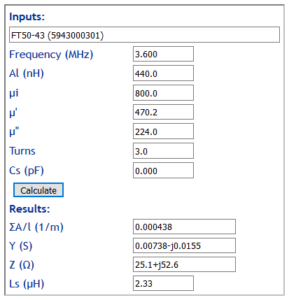 Using the calculator above which does take into account the complex frequency dependent value of permeability at 3.6MHz, we find that (ignoring self resonance effects which will be small in this case) the impedance of the inductor is estimated at 25.1+j52.6Ω. The equivalent series inductance is 2330nH.

The ARRL method overestimated the equivalent series inductance (3990 vs 2330nH), and made no estimate of the equivalent core loss resistance (25.1Ω) (or assumes it is insignificant / zero) which makes this a very low Q inductor (<2) which would not suit some applications.

The discrepancy is greater at higher frequencies, the ARRL method is inadequate for inductors at frequencies where permeability is not equal µi (usually measured at 10kHz).

Manufacturer’s data is usually a more authoritative and more complete source than the ARRL handbook, or most of the rinky dink online calculators.

Nor sure who to believe?

Get an FT50-43 core (they cost cents) and throw 3 turns on it and measure it with your analyser (even low end analysers should suit), noise bridge, whatever you have to measure the impedance of a component at 3.6MHz. Note the significant R component, and X. Be aware that ferrites are not 1% components, if you results are within 20% you have done well.

Validate your design tools, algorithms and data, before depending upon them.