Every so often one sees advice from experts on how to operate a communications receiver or transceiver for SSB reception on the HF bands.

Very often that advice is to adjust AF Gain to max, and adjust RF Gain for a comfortable listening level. This is argued today to deliver the best S/N ratio, partly due to delivering the lowest distortion due to IMD in the receiver front end.

This is the last of a series of articles exploring and discussing the wisdom of that traditional advice. The preceding parts have examined a range of receiver types identifying their susceptibility to overload in one form or another, means of minimising the risk of overload, and effects of S/N ratio.

Most recommendations to intervene lack quantitative evidence to support the claimed benefits.

Let us quantitatively explore the advice on a modern receiver.

In this test, a modern budget priced receiver, an IC-7300, is used to evaluate SINAD (similar to S/N) on a steady signal off-air, trying initially the ‘sensible’ basic automatic setting to suit the 40m band, and then various preamp, attenuator and RFGAIN settings to try to win an improvement in SINAD. 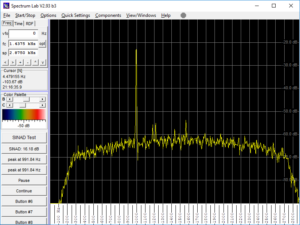 Above is a screenshot from SpectrumLab of a SINAD measurement on the IC-7300 setup normally for 7MHz (PREAMP OFF, ATTENUATOR OFF, RFGAIN MAX). Without signal, the S meter indicates around S4, with signal the S meter readings is around S7 and SINAD is around 16dB (it dances around a few tenths of a dB due to the combination of FFT bin size and integration interval).

Trying PREAMP1, PREAMP2 and ATTENUATOR makes no significant difference to the SINAD ratio. Restoring baseline settings and reducing RFGAIN make no significant difference to SINAD until a point at which AF output power starts to fall and SINAD degrades quickly. There is no combination of PREAMP / ATTENUATOR / RFGAIN that gives better SINAD than the basic automatic configuration.

In this test, there are no very strong adjacent signals, and none in-band other than the one being measured. Results may be different in other scenarios.

Crowded band conditions certainly makes the most challenging scenario, and a large and growing element of ham radio is contest focussed where performance of equipment very close to very strong adjacent signals it a standard technique to intimidate and bully other users in pursuit of QSOs and ultimately, awards. Yes, ham radio rewards unsociable behaviour.

Rather than accepting advice that is hard to explain or understand, learn how your own receiver works, and if it has shortcomings (eg in presence of extremely strong signals)

Each of the receiver types were susceptible to overload in some form or another.

Effective AGC systems do a pretty good job of preventing back-end overload on good receivers for all but extremely strong signals, and there is no sensible reason to disable the AGC, indeed disabling AGC is likely to result in overload and degraded performance.

So, it is not surprising that this traditional advice, whilst perhaps explainable for pre 1950 technologies, is not only not applicable but detrimental to performance of more modern equipment.